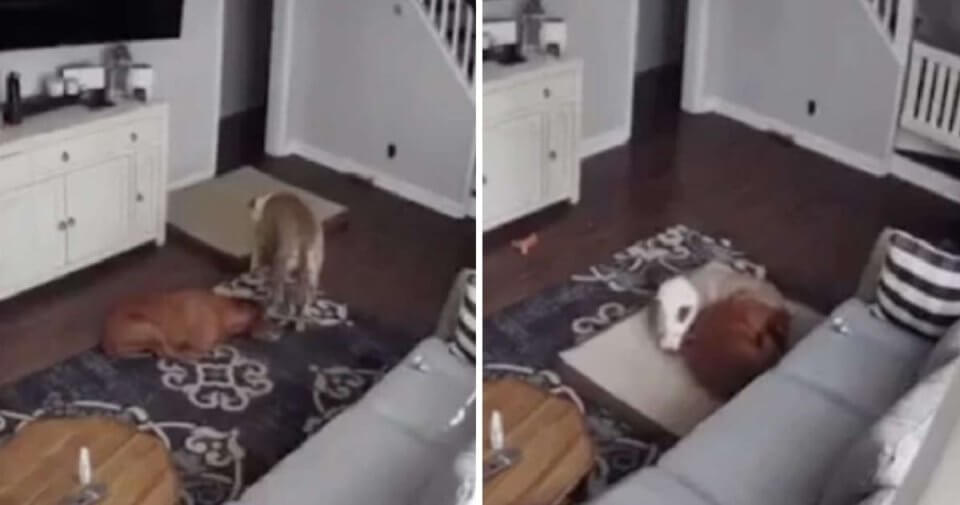 Roman and Spanky are two pit bulls who have been best friends and brothers from the moment they first met. No matter what happens, they absolutely adore each other, do anything for each other, and are always happiest whenever they are together. According to their owner, 29-year-old Jill Rogers from Hopatcong, North Jersey, Spanky adores his big brother Roman so much that he follows Roman everywhere he goes. He bonds with his brother so tightly and does not like to be far from him. Roman also loves his little brother, protects and cares for him all the time. “Roman is definitely Spanky’s security blanket,” Jackie Rogers, Roman and Spanky’s aunt, told The Dodo. “Spanky will do nothing without Roman and always makes sure he is close to him and if he’s not he gets up and goes near him.” While Roman is the ‘athletic, smart one’ who ‘knows all of the tricks [and] loves swimming’, Jill said Spanky is their ‘goofball dog’ who ‘loves to cuddle’ so much he will sometimes wrap himself in blankets ‘like a burrito’. Earlier this month, Roman’s ear started looking a little puffy and infected, so Jill took him to the vet and discovered he has a hematoma. They scheduled a surgery to take care of it, but unfortunately, while he waited for the surgery, his ear kept getting worse, and he became more and more uncomfortable.

“We had to take him back to the vet to confirm he could wait five more days for surgery and I brought Spanky along for the ride, but due to COVID we couldn’t go inside with Roman and for 20 minutes Spanky sat in the car crying/whining/barking until Roman got back,” Rogers said. At first, Spanky didn’t notice anything was wrong with his big brother, but as Roman’s ear got worse, the family noticed that Spanky was much more gentle and concerned about his brother.

“Spanky is not normally gentle. He is like a big moose but when Roman wasn’t feeling good, he was so gentle with him. He didn’t try to rough house or play with him like normal.” While the family waited for Roman’s surgery, all things they could do for him was to let him rest as much as possible. They had to work and carry on as normal, so they set up a ring camera to check up on Roman and Spanky throughout the day.

It’s via this camera, the family was able to witness the adorable bond between Spanky and his big brother. We invite you to enjoy the tender moment of love and compassion in the video below:

Spanky was worried about his brother and wanted him to be as comfortable as possible, so he brought his bed to him so he wouldn’t have to move — because that’s how much he loves his big brother.

We are happy to report that Roman is now one week post-surgery and doing much better. “He is back to his happy self,” Jill explained. Do you love this story? Tell us your thoughts in the comments below and don’t forget to share this post with your friends and family members!

10+ Naughty Dogs Who Were Not Shamed For Their Hilariously Crimes

20+ Puppies Whose Eye “Expressions” Would Win An Oscar