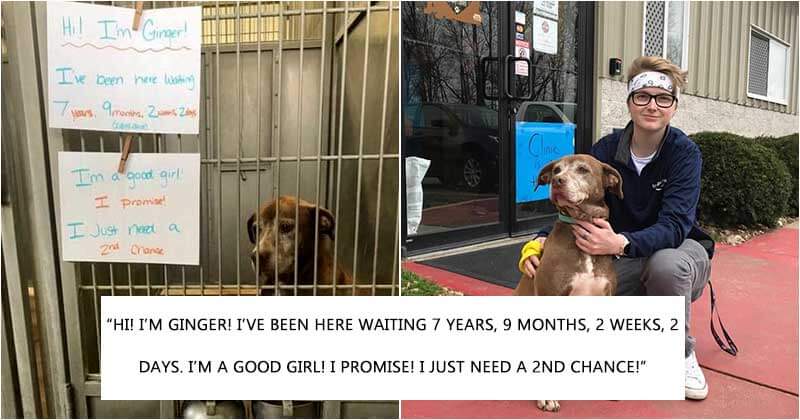 This 9-year-old Labrador retriever had an abusive past. After seven years and nine months living in the shelter waiting for adopted, she finally finds her forever home. A happy ending for her.

Ginger, name of the dog, is one of the longest residents at Dogwood Animal shelter in Lake of the Ozarks. The dog was rescued from an abusive situation that caused her “medical, emotional and behavioral issues. And, these are what made her unadoptable for a long time,” according to a Facebook post by the shelter.

Volunteers and staff at the animal shelter did not give up. They have worked hard to address those issues and to help her find a forever family.” They further emphasized that “she is and has been adoptable.” However, the opportunities to adopt Ginger were slim. The reason is that Ginger needed to be the only pet, with no children around. Despite that, their effort to help her gave a new home continued.

In March 2020, the shelter finally posted an emotional plea with a picture of Ginger and a sign clipped to the kennel that read: “Hi! I’m Ginger! I’ve been here waiting 7 years, 9 months, 2 weeks, 2 days. I’m a good girl! I promise! I just need a 2nd chance!” Following this, Mission Driven, a clothing brand that brings awareness to all shelter pets and states the importance of adoption, shared the image on their social media platforms. The post immediately went viral with hundreds of people commenting and hoping that Ginger would find a place to call home.

It didn’t stop at that; Ginger’s picture even made it to the Instagram feed of PawsUp, an account started by Ellen Degeneres.

Thank to these kindness and love, luck smiles on Ginger. After a few days, the page received adoption applications poured in from around the world, and among them was Beth, from St. Louis County, who found Ginger on Petfinder.

“I did not know she was that famous,” Beth told KSDK. “All I saw was the Petfinder. A good friend sent it to me and I was like ‘Oh my god, I need her.’”

Beth was looking for a canine companion after an incident caused her PTSD symptoms and a feeling of anxiousness. She shared that a few months ago, as she was driving across Interstate 270 near the Gravois Road exit during the wee hours, someone in another car shot her window out. Although Beth started searching for dogs for quite a long time, she hadn’t found the right one. However, when she spotted Ginger on Ginger’s Petfinder page, she knew right then that it was her whom she wanted to adopt

“I was like, ‘What if she dies and never had a family? That’s so sad.” Beth continued, “There was no ifs ands or buts, I was getting this dog…. I applied, I was like, ‘I’m not gonna hear anything back.’ Then I was like, ‘I’m gonna be pushy’ and I emailed them.” On March 13, 2020, Beth received a call from the shelter and drove to meet Ginger. At her first visit, Beth was alerted that Ginger was a bit aggressive and had been homed three times in the past only to be returned. However, Beth was determined to take Ginger back home.

The shelter then shared the good news on Facebook. It wrote:“Ginger has gone home! Her adopter has no children and no pets, has a fenced in yard and experience with dogs with dispositions similar to Ginger’s!”

Beth was actually unaware of Ginger’s popularity. She soon had people visiting her house to see Ginger and even recognized the dog when she went out for walks. “The first day was overwhelming because I wasn’t expecting so much attention,” Beth told KSDK. “I had to make her an Instagram page just so people would stop showing up to my house.”

Beth often snaps Ginger’s antics on Instagram. She said although she rescued Ginger and gave her a home, it seems like Ginger is the one who rescued her.

“It’s like, if I didn’t go through what I went through, would I have Ginger? So things happen for a reason,” Beth added.

20+ Dogs Who Need To Reset Their Default Settings