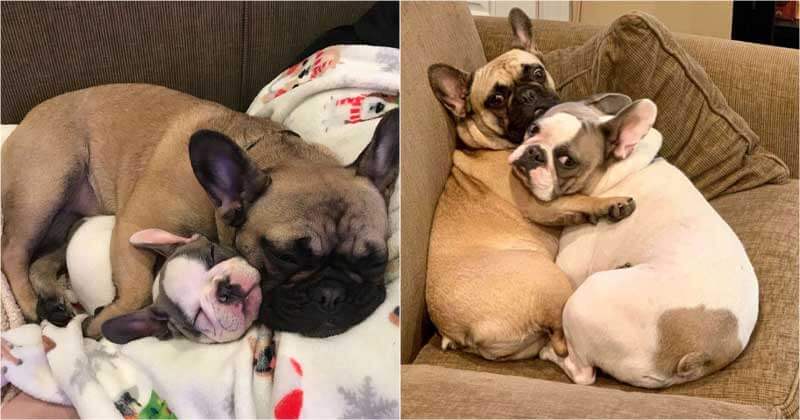 The sisterhood between fluffy guys is something difficult to explain. Not all dogs treat their younger siblings in the way they are supposed to do. Of course, they always love their sisters or brothers but still do something that shows the privilege of becoming an older sister. Frannie the pit pull in this story isn’t an exception. The adorable dog loves using her baby sister as a pillow as she used to do. The point is her sister has grown up to be quite bigger than her but Frannie doesn’t find anything wrong with it. And this doesn’t affect the bond between the siblings. The two cute sisters still get along well with each other. Frannie’s reaction when seeing her baby sister Trixie at the first time would melt your heart. The big sister literally took Trixie under her paw and immediately cuddled her.

The adorable pit pull actually had two dog sisters but unfortunately, she had lost them months before. The arrival of Trixie to her family makes her happy again. She becomes a big sister. “Frannie is only six months older than Trixie but Trixie always sees herself as the little sister.” Jennifer Lewis, the dogs’ mom, told The Dodo. Frannie and Trixie soon built a strong bond. They loved accompanying each other in all activities, especially taking a nap. They found it happy when napping next to each other. This kept them warm all day long. The two adorable pit pulls keep this habit until these days. They’re now 3 years old and still love cuddling each other on the coach, chair, footstool or any spot they like.
Frannie even continues using her sister, Trixie as her most favorite pillow. The point here is quite a bit bigger than her sister and Frannie doesn’t really care about it. She finds it really relaxing and could never get a better one. “Trixie still climbs on top for naps as you can see,” Lewis said. “Frannie does love to cuddle with her so she will let her sleep on top for a while.” Do you love the story of Frannie and her sister, Trixie? Let’s share it with your friends. It is enough to make your day!