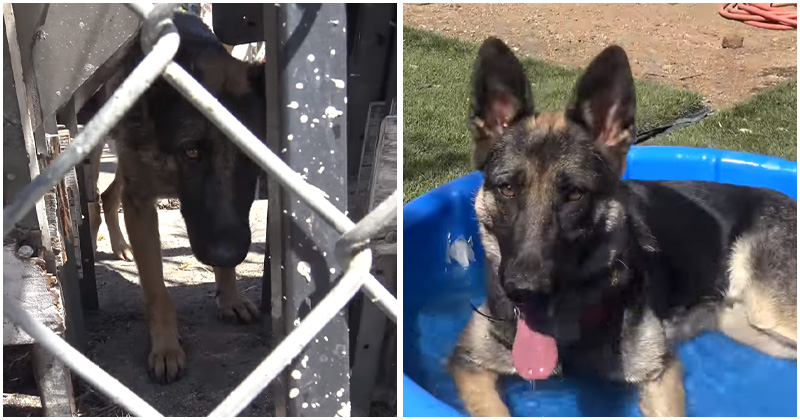 Dogs may be man’s best friend but this doesn’t mean man is always friendly toward dogs. Sometimes the way some so-called “humans” treat many innocent, voiceless critters is just so horrible it hurts to even think about these miserable canines.

This German Shepherd was trapped on an industrial lot with an injured neck and a broken paw, with no food nor water nearby. No one knew exactly how she ended up being stuck there, but it’s easy to assume that she didn’t sneak in on purpose. That lot wasn’t used very much and was only opened once in a while, so it’s almost impossible for the poor girl to get out on her own while its gates were tightly shut.

Thankfully, some kind locals informed Hope For Paws just in time and Lisa Arturo and JoAnn Wiltz immediately drove over to the area after hearing about the pitiful dog. After giving her some water, Lisa tried to lure the dog out through a hole in the fence, but unfortunately it wasn’t big enough for an adult German Shepherd.

The two downhearted rescuers had no choice but to leave some food and water there and headed back home, but they promised the dog to come back the next day to save her when the property manager would be available.

As the rescuers arrived at the lot again, they were so touched to see the dog waiting for them right behind the fence. This time, with the help of the manager, they could easily get in and take the luckless pooch out without any trouble.

After receiving the medical care that she desperately needed, Elsa quickly regained her zest for life and became a happy, cheerful doggo who was very fond of her humans! It’s safe to say that the future seemed pretty bright for this young girl.

Please share Elsa’s heartwarming story with your loved ones!

Dog Owner Bids Goodbye To ‘His Son’ In Heartbreaking Moment