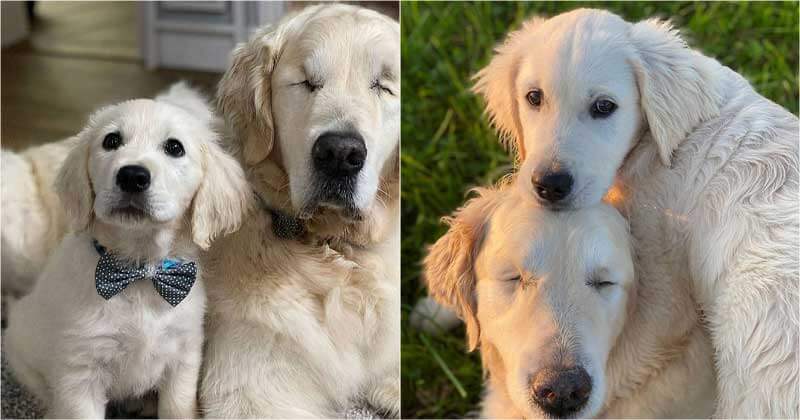 There is no strange to see dogs working as a guide for people with visual impairment. They help these people a lot, making their daily life go easily. These affectionate, loyal, and responsible animals are also adorable friends and great companions. They can even comfort these people when they feel sad or angry. Giving them a hug or resting their head on them is always enough to melt the heart of their owner. And, the dogs also become a perfect guide for their blind furry friend. They have the same breed, so can understand each other better. The story of the cute Golden Retriever puppy named Oko below will get you hooked. This adorable guy becomes a guide for 12-year-old blind dog Tao. The two have built a strong bond since then and became inseparable. Let’s scroll down to know more! Tao’s owner Melanie Jackson said that Tao lost both of his eyes last year. Her old furry friend was diagnosed with glaucoma, an eye disease where the eye can’t effectively drain its fluids. She never thought that his disease progressed unexpectedly and rapidly like that. One morning, Tao seemed to be doing just fine, but in the evening, he started shaking his head (dogs do that when they feel pain), and just a few hours later, he went blind in one eye and had the eye removed. Unluckily, Tao got his other eye gave out and removed in January. Tao was diagnosed with glaucoma that caused him losing both of his eyes. But the brave dog recovered quickly and was happy again Despite his blindness, Tao recovered quickly. He started walking up the staircase all by himself and was able to walk off-leash just three days after losing both of his sight. Tao seemed to stay again. But his owner Melanie Jackson found that there was something missing. Tao needed someone to play with him and keep him company so that he didn’t feel lonely or get left. So, she took matters into her own hand – find a friend, companion, and a guide for her poor furry friend. There was still something missing “Tao’s health is really good now. He’s in no pain, and to say he’s nearly 12, he acts like a much younger dog! He does everything he used to do apart from jumping up hay bales and jumping over hedges—we walk around 8 miles a day and he still trains most days,” Melanie told Bored Panda.
Melanie decided to find a dog that could befriend and get along well with Tao Oko is also a golden retriever. The pup was just about 8 weeks old when Melanie got him, but he quickly got Tao’s trust and built a strong bond with him. The two become inseparable ever since. Oko performs excellently as a guide dog to Tao. Tao follows Oko around when they’re walking, and they also sleep together. The owner is also simultaneously training Tao to follow Oko so he won’t get into trouble. “Oko is being trained by me—if not, he would lead Tao into mischief as he is a typical inquisitive puppy. Tao is being trained to follow Oko’s scent and Oko to listen and respond to my commands to ‘stop, wait, go right, go left.’”

They’re around each other all the time. They walk and sleep together The owner is also training Tao to follow Oko’s lead Oko is now about 17 weeks old. The boy has gotten used to his new role. His owner has also raised a cause for glaucoma awareness in dogs. She has worked with The Kennel Club, who have used Tao’s DNA to help identify other dogs’ proneness to glaucoma. It can be prevented if diagnosed early enough. The duo Tao and Oko is exploding over social media, with a solid 30k followers. They love the way the two get along well with each other. Oko, being about 17 weeks old now, has gotten used to his new role Both Tao and Oko have amazing personalities to match: “Tao is a 100% mommy’s boy—he is always close by and he is like my little shadow. He loves to please and his favorite thing is scent work—he still scents out balls in the hedges and fields and loves finding his toys when l hide them either in the garden or in the house. Oko was bred by a fantastic breeder from Cornwall—we had always planned to have another pup after Tao lost his brother Otis to cancer 3 years ago, but due to his sight loss and the training l needed to do with Tao, we had to focus on him until the time was right. Tao is an amazing dog and is loved by everyone we meet—he is known locally and people often ask if they can have a selfie with him.”

Here are some other photos of Tao and his cute guide, Oko Dressed Up In A Tuxedo To Greet His New Family But Owners Never Showed Up, This Pup Finally Found His Home