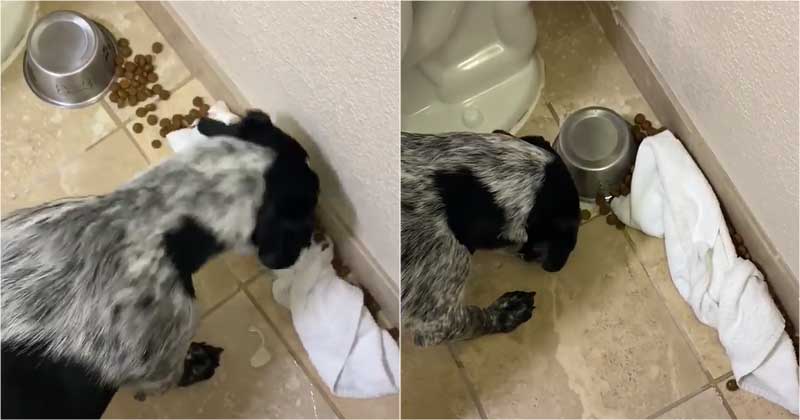 Every dog is a good dog. They’re affectionate, smart, and helpful. Some are even incredibly polite and well-mannered. These adorable furry friends always try not to bother their owners. Eddie, the dog in today’s story is an excellent example. He tries to clean up spilled food on the floor himself. The point here is the good boy accidentally causes the trouble. He decides to take matters into his own hand. Eddie has been a neat dog since he was a puppy. He’s a very good listener, and love humans around him a lot. He finds it happy to make his humans happy.

“He is the most perfect puppy … has never chewed up anything that wasn’t his, doesn’t bite, listens to whatever you tell him,” Taylor Fox, Eddie’s mom, told The Dodo. “He is the best boy!” Eddie always tries to keep everything neat and tidy, even when in a space that isn’t his. That’s why, when he accidentally spilled food in his food bowl all over the towel laid down, he cleaned it himself. The incident happened at a hotel. His parents took him to a specialist for his medical checkup and stayed overnight here.

The good dog felt more terrible as he made a mess when he wasn’t in his home. So he decided to clean the food off the floor by himself. You can watch the video here.

Although Eddie tried his best to clean up the spilled food, he didn’t succeed. Then he came up with a different plan — hide the mess instead. “He used the towel that I had laid down and pushed it with his nose enough to where the kibble was ‘hidden,’” Fox said. “He’s a people pleaser so I’m sure he was embarrassed that he [spilled] the food.” Not just that, the dog ate all the pieces of food that weren’t covered by the towel. What an adorable dog! Eddie’s parents never get angry or upset with the mess their dog makes. They even adore him more when seeing his reactions to his mess. He always deserves to be called a “good boy”.

10+ Funny And Cute Dog Snapchats That Will Make Your Day