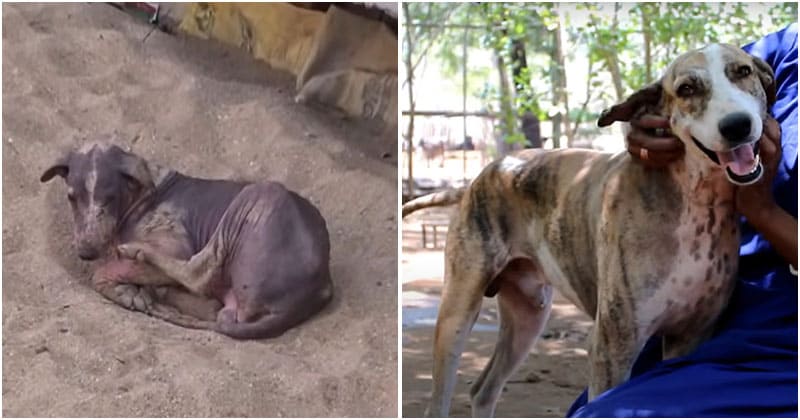 Some volunteers at Animal Aid Unlimited were walking on the street, when they found a stray dog lying in pain and exhaustion. He curled up on the ground and was hardly able to open his eyes for pain caused by mange. He could barely move because mange ravaged him, caused scabs and open wounds.

Despite being a street dog, he didn’t seem to be scared of humans. He let one of the volunteers touch him and give him food. Because of being starved for many days, he ate immediately. However, when the man wanted to lift the dog, he became scared and ran away. He seemed to think that this person would harm him.

The rescuers tried to find how to save the boy without causing any injury to him and decided to use a net to catch him. After failing several times, they finally caught him safely. After calming him down, they took him to their shelter, where he received medical treatment and care for his wounds. They even gave him a new name Tigger.

His toes were sore and swollen, and his body was full of open wound from scratching. The rescuers applied medicated cream to remove the crusty scabs. They treated him with an anti-parasite injection, many medicated baths, food and comfort. It would be a long road to recovery, but everyone would try their best to help him.

Thanks to all the love and care of volunteers at Animal Aid Unlimited, Tigger started to show signs of recovery. His skin and body got more and more healthy. After one month, he completely healed and became a playful dog. Meet striped tiger-boy Tigger today!

Comfort means everything to one who is hurting. If you want to support Animal Aid Unlimited, India to help more animals in need, you can donate here.

10+ Times Owners Wanted Cats And Dogs To Live Together, But It Didn’t Work Out As Planned

This Rescue Pit Bull Thinks He Is A Cat, And His Family Keeps Sharing Pics That Prove It

15 Dog Breeds Whose Looks Prove That Once A Puppy, Forever A Puppy

20+ Pics Of Alaskan Malamutes To Improve Our Moods