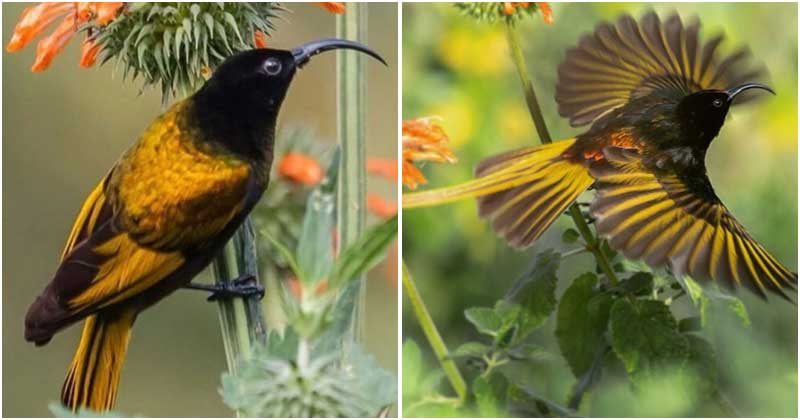 There are many birds that are most gorgeous during the breeding season. At this time of the year, these creatures will put on a stunning coat that looks different from the daily suit. The golden-winged sunbird is one of these striking birds. Most of the time, this bird is covered with black. But this sheen turns shining metallic reddish-copper when the breeding season begins. The brilliant gold plumage becomes a distinctive feature of male birds, helping them attract females. Comparing with the male, the female is duller with an olive color on their upperparts and yellowish below. Young birds look similar to the female, though they have darker bellies. The golden-winged sunbird is a member of the Nectariniidae family. They are a nomadic species whose habitats depend on the food supply. This sunbird can be found in forest verges and clearings, cultivated areas, bamboo forest, and tall grassland in the Congo, Kenya, Tanzania, and Uganda. They feed on nectar, especially from the mint Leonotis nepetifolia flowers. However, these birds also eat nectar from other flowers and eat insects, such as beetles, flies, ants, and wasps, and larvae. During the breeding season, female golden-winged sunbirds build purse-like nests on their own. They then lay eggs in the nest and incubate them. The male joins the female in feeding the hatchlings until they are fully fledged. Let’s share this article with your family and friends!

Meet Three-Wattled Bellbird, A Unique Bird With Mustache And Covered In Reddish Brown, Except For White Head And Neck

10+ Pets Who Are Not Able To Hold Their Emotions Back

10+ Pics Of Animals Before & After Being Called A Good Boy

Adorable Moment Of Kitty Playing With His Human

Meet Zonkey, An Insanely Adorable Foal Of A Zebra Mom And A Donkey Dad