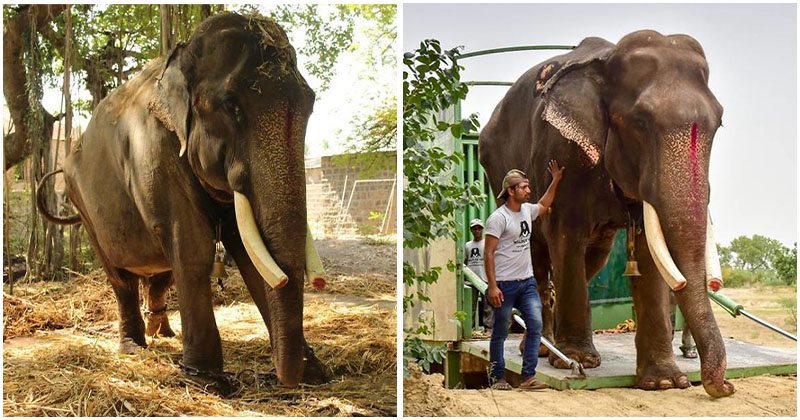 All animals deserve a worry-free life in their natural habitats, but sadly many of them are still being mistreated daily by the so-called “humans” because of different purposes. Born mild and gentle, the elephant is one of the most vulnerable creatures in front of humans. Even in some special countries where this species is worshipped like a symbol of the supreme being, there are still countless miserable elephants who have been abused by the locals for decades.

Gajraj was one of those pitiful critters. Even though his name literally means “the King of elephants”, Gajraj was no king. In fact, he was more like a slave.

The 70-year-old tusker was forced into working his toes to the bone at a temple in India as an icon of worship, he had been chained for over 51 years and had to suffer many severe health issues due to overworking and old age.

It’s not until a PETA campaign brought his story to light that Gajraj’s hopeless situation was finally noticed. Right after hearing about this magnificent animal, a Wildlife SOS team quickly stepped in to rescue him and gave him the medical treatment as well as the freedom he desperately needed.

The mission was truly tough as the unruly local public made it very hard to get Gajraj onto the ambulance, and the rescue team had to lean on the help of a large police force to overcome their sudden attack.

When the difficult part was finally over, Gajraj officially embarked on an incredible 3-day journey to travel 930 miles from Aundh, Maharahstra to the Elephant Conservation & Care Center (ECCC) in Mathura, Uttar Pradesh. He was undoubtedly happier than ever.

Gajraj finally got the life he deserved, but actually he should have had that life from the day he was born.

Update: After 3 years of living under plenty of love and care, Gajraj has left this world on a summer day. He was much loved for his tender and sweet nature, and he would be missed forever.

Please share Gajraj’s moving story with your loved ones.

10+ Stories About Pets Full of Love and Drama

Pack Of Adorable Baby Foxes Spotted In A Family’s Backyard

20+ Hilarious Photos Proving Your Pets Were Born With Acting Skills