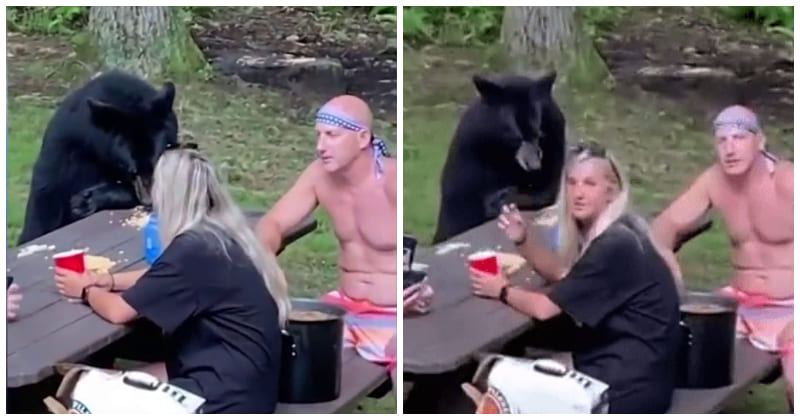 When this Maryland family was enjoying their picnic, none of them could ever think that they would have company, especially from the forest. One man sows and another reaps, this guest appeared totally unexpected and claimed its share of food.

Kaitlyn Nesbit and her family were having a meal when this black bear showed up from the forest. The bear approached their table but surprisingly, she was not there to scare them. Actually, she was attracted by the sweet smell of the peanut butter and jelly sandwiches. The black bear gently waited at the table for the family to share their food. In contrast, the family members experienced the most nerve-racking moment of their life when they noticed the animal.

Other members of the family took the chance to record this unbelievable footage. For those at the table, they tried their best to stay calm and also not to startle the black bear. When asked, Kaitlyn recalls: “We were all told to not make sudden movements and stay where we were”.

After having some sandwiches to ease its stomach, the bear made her way back to the forest all composedly. The family was in their luck this time as they all came home unscratched afterwards. Their action, however, was seriously criticized on social media because it is illegal to feed bears in Maryland.

“DON’T FEED IT!,” comments on the story. Feeding wild animals could be very enjoying but it will do nothing but harm to their natural behaviors.

This Real-Life Batman Doesn’t Save The World, He Saves The Lives of Shelter Pets

Born With Symmetrical Spiral Horns, The African Antelope Greater Kudu Is At The Center Of Attention

25 Animals Whose Pure Emotions Could Melt Our Hearts Of Stone