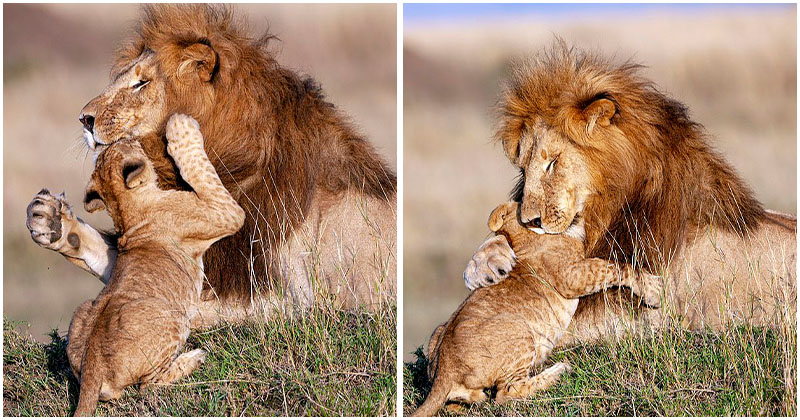 Father’s Day is coming and we just can’t wait to share this heartwarming story with you! First aired in 1994, the “Lion King” is undoubtedly one of the most successful Disney works and has always been on the lists of the greatest father and son movies of all times. The masterpiece has won the love of millions of fans all over the world and now after over two decades, we finally get a chance to admire Mufasa and Simba’s touching relationship in real life.

This amazing lion duo has gone viral after being spotted sharing an affectionate hug at Masai Mara National Reserve, Kenya. The beautiful moment was caught on camera by French photographer Sabine Bernert and immediately captured the hearts of not only Disney fans, but also animal lovers around the world.

According to the 53-year-old photographer, he was visiting this East African country to document the wildlife there and take several photos for a children’s book. Of course, what he accidentally witnessed was far beyond what he was expecting.

Bernert woke up really early that day and quickly came across the father lion who was sitting alone on the savanna. His cub showed up not long afterward, pretending to sneak attack the adult lion, but his action did not go unnoticed at all.

To Bernert’s surprise, as soon as the real-life Mufasa caught a glimpse of his Simba, the very first thing that sweet dad did was holding him in his arms lovingly. Thankfully, the Paris-based photographer was there to share that astonishing moment with the whole world.

“The lion pretended he hadn’t seen the cubs until the last second. Then they started to play joyfully,” Bernert recalled. “I especially love the moment when the male lion is hugging the cub softly. The contrast between his brute strength and his gentleness, the huge size of his paw very softly holding the little cub.”

“I was amazed by the way this huge lion was playing so gently with the cubs,” he continued. “They really looked like they were enjoying themselves and have fun. With the delicate light of the sunrise, it was a pure moment of grace.”

Aren’t these two adorable? Please share this delightful story with your loved ones!

Meet The Flame Bowerbird, The Only Flame That Won’t Destroy The Forest

Woman Creates A Tiny Bed For Squirrels In Her Garden

Pair Of Owls Caught On Camera While Sharing A Tender Moment

10+ Baby Animals That Can Save Your Gloomy Day