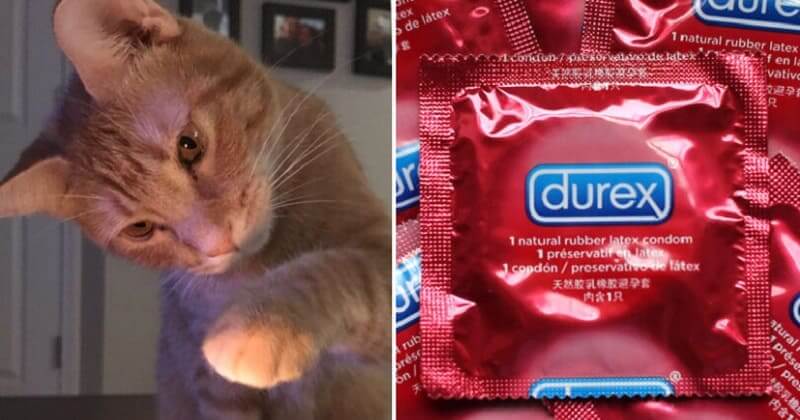 Recently, internet users went wild after a man posted his bizarre story to Reddit, explaining how he holds his cat to be responsible for his wife’s pregnancy. It sounds crazy, but the fact that the actions of his cat led to his wife getting pregnant.

The man and his wife welcomed their first child, a boy, last year, so they decided to hold off having their second child until the pandemic was over. Moreover, the pregnancy was stressful due to preeclampsia, and his wife needed time to recover from the pregnancy. He revealed that he and his wife decided to use condoms because his wife felt sick on the pill, and was trying to lose weight. The couple thought these condoms would ‘be enough’ to prevent a pregnancy, but their ‘evil genius’ cat Tom had other plans. Tome pocked holes in condoms before they used it.

The man in his tale wrote: “We thought rubbers would be enough, but that’s where our cat comes in…” “Our cat is an evil genius. I seriously think the greasy orange little s*** is still smarter than our nearly one year old. He gets into everything, and I do mean everything. No door, drawer, or cabinet can stop him, and if he knows where something he wants is he WILL find it.”

“It’s so bad that for weeks after adopting him I thought there was poltergeist in the house because each morning I’d wake up to find every single cabinet door in the kitchen wide open!”

“My first f*** up was storing the condoms in the same drawer as the Q-tips, which he loves to get into and shred apart,” the Reddit user wrote. “He must have seen the box of Q-tips in the drawer when I put my rubbers away, because not even an hour later I stumbled upon a horrific scene of chewed plastic straws, shredded cotton fluff and shiny gold condom wrappers scattered around the gapping drawer that once contained them.”

“I didn’t think anything of it at the time and just cleaned up the destroyed Q-tips and put the condoms that had spilled everywhere back into their box without a concern in the world.”

That was until three weeks later, when his wife started showing symptoms of pregnancy. The pregnancy test came positive and left the couple puzzled. It didn’t take long to realise that Tom got into the drawer and poked a hole in the condom they had used. “That is until fast forward a few weeks to just the other day, when my wife was complaining of nausea and tender breast. We immediately shoot each a concerned glance as this ain’t our first rodeo, and she felt the same way before discovering her first pregnancy. She still had a half empty box of tests from the year before and decided to take one just to be sure. Followed by another one… and another one… all positive.”

The cat destroyed the couple’s plan, but at least there will be a fun conception story to tell later on. “Can’t wait to explain to my new son or daughter one day that they owe their existence to the family cat!”

If you love this funny story, feel free to share it with your friends and family members!

Little Girl Teaches Her Cats How To Draw A Flower

Meet Baron, The Ragdoll Cat Who Looks Like A Fluffy White Cloud