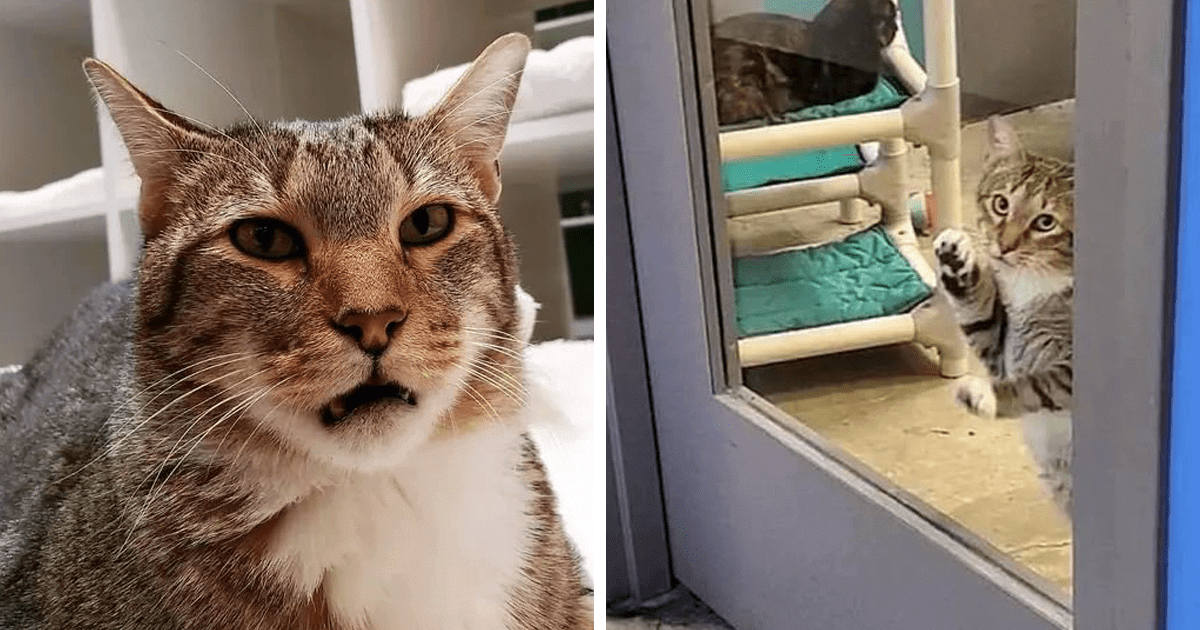 Meet Quilty, a six-year-old rescue kitty who is currently living at Friends For Life Animal Rescue and Adoption Organization in Houston, Texas. Sadly, he was put up into a solitary confinement because he caused plenty of trouble at the shelter. He let other cats out of their enclosures and into the lobby after volunteers had gone home. At first, Quilty was sent to spend his time alone in the shelter’s lobby after he continually helped other felines escape from the senior room. He repeated this about 3–5 times a day, and each time he was unfortunately caught by staff at the shelter. He was then put into an integration kennel so he could reacclimate. However, he escaped that kennel too! Finally, the staff put him into a solitary confinement. And of course, Quilty was not very happy about this because he loved to roam around the shelter along with other cats. The staff said that his roommates missed him so much after he was banished to the lobby. They enjoyed their nighttime escapades around the shelter when Quilty released them to run free. According to the shelter, this isn’t the first time that Quilty has tried to cause trouble. At his previous home, he learned how to open the door to let his dog brother inside from the backyard. However, the dog made a mess on the floor, so the owner took him back to the shelter. Quilty quickly became famous when the shelter posted a video of his escape attempts on its Facebook page with the caption: “Quilty will not be contained and he has no shame.”

You can watch Quilty in action in the video below!

Never give up on your dreams. This is my technique. I'm just WAITING for them to forget to use this stupid lock thing… . . #freeQuilty #NoMoreDoors #QuiltyNotGuilty

As you can see in the video, it’s obvious that he’s a total genius and was just waiting for a human to slip up so he could open the door and escape once more. And if you’re wondering whether Quilty is still locked up, we are excited to announce that he was just adopted by his potential owners. Despite the fact that Quilty is certainly a trouble-maker, he’s still loved by fans online and the animals at the animal shelter. If you love Quilty, you can follow his journey on his Instagram @free_quilty or on the Friends for Life Insta @friends4lifeorg. What do you think about this cat? Tell us in comments below and don’t forget to share this story with your friends and family members!

10+ Camouflaged Cats That Win At Hide And Seek

Tuxedo Cat Decides To Take Her Plush Toys On Her Adventures