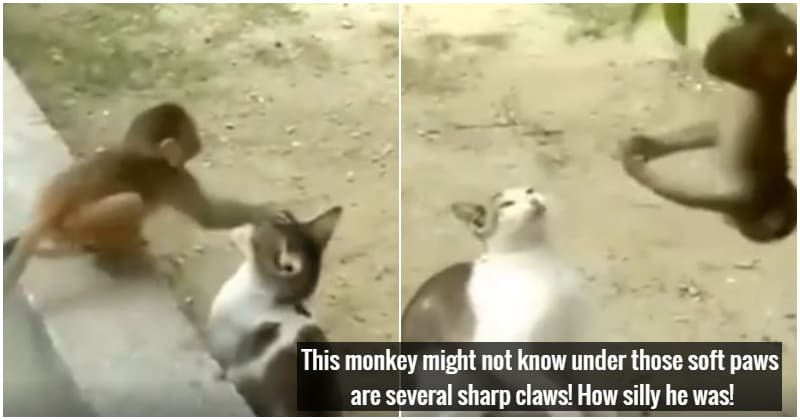 Cats are not good at keeping their temper. They can easily get mad with something wandering around their sights more than one time. However, if you see a cat being patient with someone else, just don’t be shocked. Cats will become sweet and tolerant toward the person (or an animal) they love. This cat is the same.

She has a good friend, a baby monkey, who is so playful and energetic. In a video capturing their lovely behaviors, the two friends were staying together in the yard. The monkey swung in circles around his cat friend, hoping down and teasing the cat. He even wrestled the cat, jumped off her, and continued to swing around.

I know what you are worried about, but guess what! The cat didn’t put up any fight. She was calm, and she kept watching her monkey friend playing around. Maybe she was just too dizzy and tired to stop him! At the end of the video, she caught him, but soon after, the monkey went back to teasing. This monkey might not know that under those soft paws are several sharp claws! How silly he was!

Sphynx Kitty Looks Like A Bat Due To Rare Neurological Condition

20 Cats Who Are Ready To Get Into The Halloween Spirit