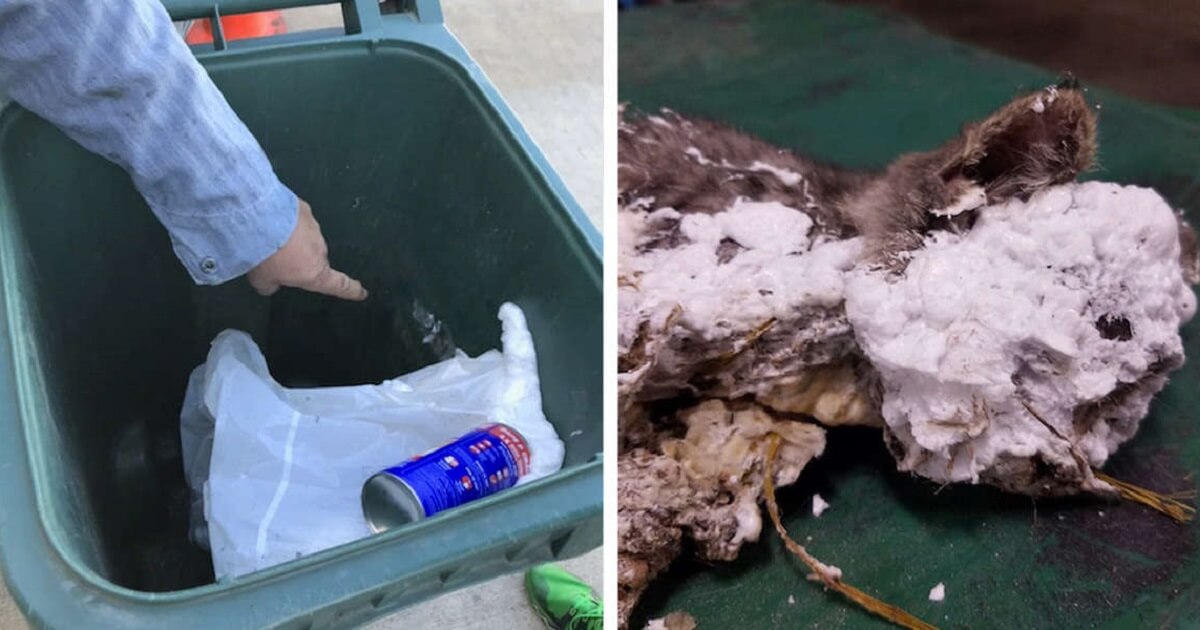 On May 3, a kitten was found covered in spray foam and trapped in a garbage bin in Hillsboro.

A garbage collector was emptying a bin into his truck when he noticed something was stuck. From deep inside the bin, he can hear the distressing cries of an animal in need help. When he went closer, he found a tiny kitten hanging upside down by its back legs. The helpless young kitten was sprayed with hardening foam and left to die by some cruel person. He then brought the kitten to his company offices where staffs were able to free the kitten and then took him to a veterinarian. “The driver took the garbage can back to the Hillsboro Garbage Disposal facility where shop staff worked together to remove the 8-week-old male kitten from the spray foam and take it to a local veterinarian for care,” the Washington County Sheriff’s Office wrote in a statement. “He looked like something out of a Halloween horror show,” Diane Healey, from the Hillsboro Veterinary Clinic said. “It obviously hadn’t been there too terribly long, or he would have suffocated…the head was covered, the face was covered, the legs were stiff, he couldn’t move them. Deputies are now investigating this act of animal cruelty. They said it is not clear who covered the kitten in foam, but they’re sure that it was intentional. There’s a long list of people who want the cat, but the owners expressed interest in getting the cat back. So, once the investigation is completed, the cat will be returned to his owners, who are not suspects. The kitten is now resting in the Bonnie L. Hays Small Animal Shelter and is expected to make a full recovery before coming back with his owner.

Scared Cat Becomes Energetic After Being Rescued From Mouse Trap