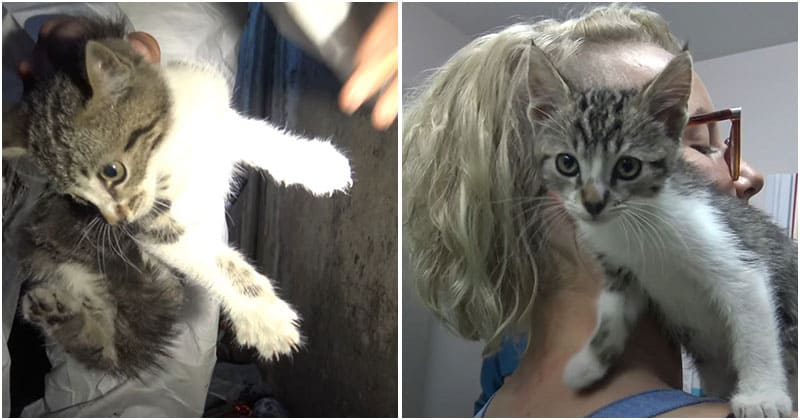 A man named Juan Delena was walking on the street when he heard a kitten crying from a storm drain. Knowing that the kitten was in trouble, he quickly contacted Hope For Paws for help. After receiving the urgent call, two rescuers JoAnn Wiltz and Eldad rushed to the scene to save the poor animal.

With the help of Juan Delena, the rescuers finally went to the kitten’s place. The terrified baby was stuck in the storm drain under the street, so they had to use some tools and materials to open the drain. The pipe was long, so Eldad didn’t know exactly where the kitten was. After checking the pipe, Eldad decided to secure it in case the kitten stayed inside.

Because Eldad and JoAnn had to go underground, they had to mark the open hole so no one fell in. Despite marking the hole, they were still worried about someone walking and falling into it. For this reason, they called Josefina Vasquez to help ensure the safety of the public.

When Eldad found the kitten, he managed to push him towards JoAnn. He decided to assemble a 36 ft long pole and push him out of the pipe. JoAnn covered the second pipe to make sure that the kitten wouldn’t slip by her. After a while, she finally caught the kitten and named him Splinter.

They took Splinter to their office where the doctors checked for his health. After being checked, Eldad and JoAnn gave him a warm bed, good food, clean water, and toys. Splinter seemed to realize that he was in safe, so he started to show his sweet personality. He was then fostered at Room 8 Memorial Foundation.

We are so glad to know that Splinter is living his best life with his new owners. He was adopted by a great family who will love him and will never leave him in danger. Thank you to everyone who helped rescue this sweet little kitten! You’re amazing! Keep up the good work—in all the chaos, these little lives matter.

If you would like to support Hope For Paws, Room 8 Memorial Foundation, and other organizations, you can help them by donating here. Every donation sends them to the next rescue mission, so please join them and help them save so many lives. Don’t forget to share this post with your friends and your family members!

10+ Times Cats Said “If It Fits, I Sits” And Proved Themselves Right