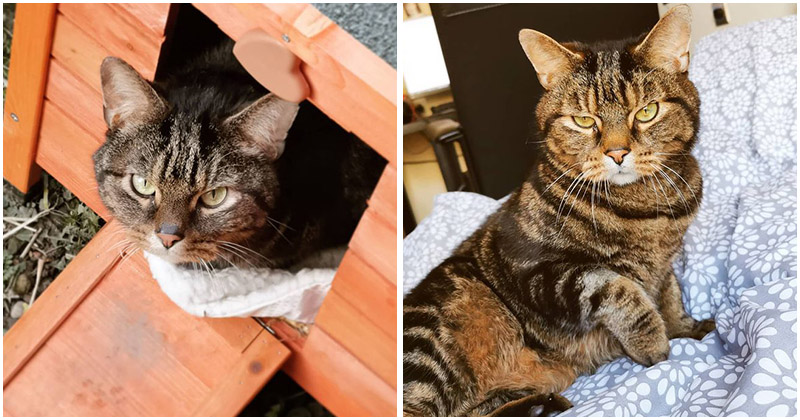 If you are determined and passionate enough, someday you will get just what you long for. If you need more reasons to believe in your strength, this cat’s story will give you one.

Anastasia Sutcliff had always seen stray cats showing up around her home in Sheffield, England, but then one day she spotted an unfamiliar face. That fierce tabby hissed at her and didn’t allow her to touch him, he looked pretty angry and stressed. But he kept showing up at her window again and again, begging for food and spent the night there all by himself.

Anastasia fell in love with the aggressive cat somehow, she called him “Tiger”. As the girl shared, she and Tiger had similar personalities and they both didn’t trust people. She really felt that Tiger could understand her in a way no one could.

Unlike other stray cats, Tiger had no place to spend the night, so Anastasia decided to build him his own little house, which was placed right under her window. The girl was overwhelmed with joy as she saw the kitty lying there cozily.

After Anastasia gradually gained Tiger’s trust, he finally let her pet him for the first time. Both of them were truly happy at that very moment.

However, their joyful time didn’t last long as Anastasia’s neighbors called the animal control and they quickly came to take the cat away. The sudden separation broke Anastasia’s heart. That day, she went outside to say goodbye to him with watery eyes.

Thankfully, it turned out that farewell wasn’t their last meeting. Tiger was moved to a foster home and Anastasia was able to visit him whenever she wanted to.

In the meantime, Anastasia struggled to find a way to adopt her furry little friend, but the process was pretty troublesome due to her building’s no pet policy. But after their incredible friendship went viral and touched the hearts of so many people, she managed to make it. It’s not hard to imagine how happy she was as she heard the wonderful news, the girl even burst into tears!

Now Tiger is living a fabulous life with his biggest fan on Earth, but he also has many other fans around the world too. Some of them even send presents to their house to show their love and support, isn’t it great?

Here is the touching story of Tiger and his new mommy:

For more delightful moments of Tiger, check out Anastasia’s Tiktok or Tiger’s Instagram. And don’t forget to share their amazing story with your loved ones!