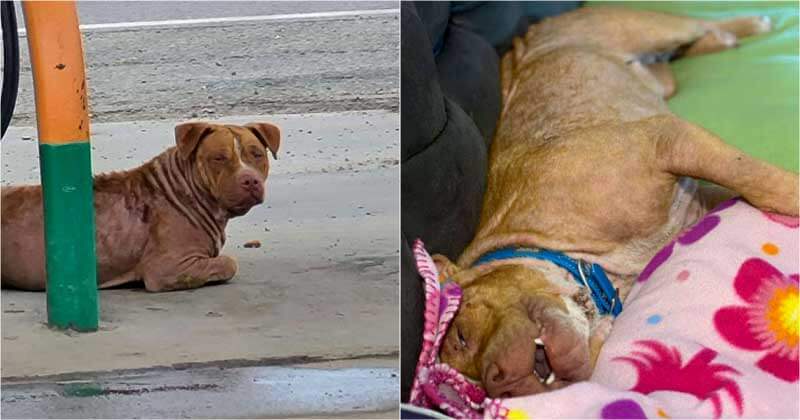 Finding a forever home where they are loved and cared for must be the happiest thing to animals. To those that are abandoned, have been waiting for the adoption, or have an unhappy life with their old owners, this is a more priceless chance. It can literally change their life, in a positive direction, forever. These newly adopted animals can totally relax. It’s normal to see them sleeping fast just moments after getting adopted. This is also what happens with this stray dog. The poor furry friend was abandoned but thankfully rescued and adopted by a couple. He slept fast and snored in his owner’s car just seconds after rescued. Scroll down to know more! One early morning two weeks ago, Jayme Harley was sleeping when she heard the sound of text notifications from her phone. This was a message from her boyfriend. He had sent her a photo of a sad-looking dog at a gas station and written, “Go get him!”

Actually, the woman was still groggy at the beginning but started to realize this was a critical moment. Jayme wanted to adopt a second dog, but her boyfriend hadn’t been too keen on the idea. So, if he wanted her to rescue one, this was big news. “When it registered with me that it wasn’t a dream, I knew that it was a serious thing, that he really wanted me to go get him,” Harley told The Dodo.

Jayme’s boyfriend, Aaron Peters, spotted the pit bull as he was driving his early morning FedEx delivery route. He decided to stop his car at the gas station and was captivated by the dog’s kind bright blue eyes. “He looked like he needed a family,” Peters told The Dodo. “I figured we could give him somewhere good to live.”

Harley then immediately got in her car and rushed over to the gas station in Kinta, Oklahoma.

When she arrived, she gave the dog some water and soon learned that the poor boy was abandoned. “A girl pulled up, and she told me that she’d seen him jump out of a car,” Harley said. “And no one would take him in because he was a pit bull. That broke my heart because it should not matter what breed he is. All he wanted was somebody to love him.”

Harley decided to offer this dog a new home. She put him in the car and before she had even driven out of the parking lot, he was asleep and snoring. It was just a few seconds. Harley wanted the dog to have a medical check-up, so she brought him straight to her veterinarian’s office. The dog didn’t have a microchip, but other than a bit of mange, he was in good shape. She named the dog Rufus and headed home together. She wasn’t sure about whether Rufus could fit in the new living environment and befriended Harley’s cat — but he became instant pals with her dog.

“They just started loving on each other, and they have since been best friends. They sleep together. They do everything together,” Harley said.
Amazingly, it took Rufus no time to also bond with Harley’s cat, kids and boyfriend. The dog made himself right at home and really enjoyed living here.
Peters just knew the dog would fit in the moment he saw him. “He’s a good dog,” Peters said. Peters and Harley now think that Rufus was for them.

Poor Kitten Gets Rescued After Being Dumped Into River