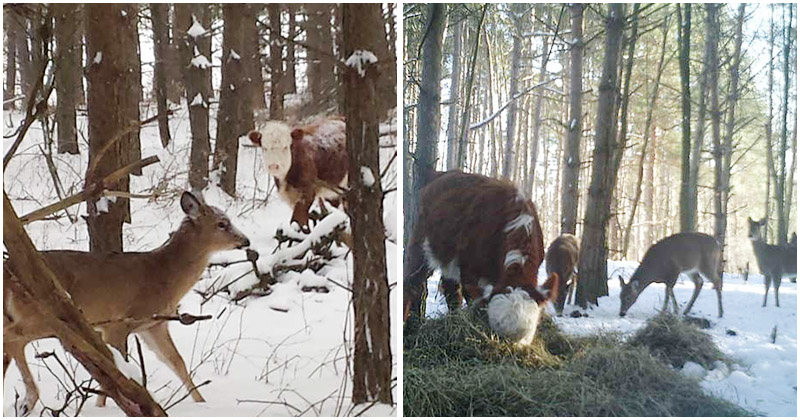 Cows are often considered to be tame and docile animals, but once they face danger, they could be as fearless and bold as any predator out there. The amazing Bonnie in this jaw-dropping story is an excellent example. In fact, her incredible journey could leave any human being speechless.

The little calf was born on a farm in Holland, New York and had been living peacefully alongside her mother for the first four months of her life. However, when their owner passed away, her fate was turned upside down.

After the departure of the man, his family simply decided that they want nothing to do with the cattle and immediately sold the whole herd to a slaughter nearby. As Bonnie watched her friends being forced into that trailer one by one, she turned her fear into action and seized the moment to run into the woods.

Of course, it would be not worth mentioning at all if people had found Bonnie and brought her back to the slaughter. But thankfully, it was not how the story ended. Our fierce gal managed to hide really carefully for the next few months somehow, making herself a star of the whole town.

Everyone was curious about the daring cow who literally said no to slaughter and beat the odds to survive. It wasn’t until they set up cameras in the woods that they began to spot the famous girl, and what they saw amazed them all, again.

Bonnie was not alone, she was adopted by a wild deer herd. The deers let her in as if they belonged to the same species, and Bonnie fit in perfectly too. They did everything together like a real family.

However, it is no secret that cows are no wild animals and they can’t live in the forest. Without the help of humans, Bonnie could hardly survive the harsh winter in Holland and people knew they had to save this girl before time ran out. The only problem was, Bonnie had lost all her trust in humans, and there was nothing much they could do to change that fact.

That’s when the kind-hearted Becky Bartles came into the story. She braved the thick snow every day to visit Bonnie, feed her and take good care of her. Bonnie was terrified at first, but then she gradually learned to accept this woman. It took Becky about eight months to totally gain her trust.

Even though Becky would love to let Bonnie stay in the woods forever, she still knew the cow needed a more suitable environment to live in. So she contacted the Farm Sanctuary in New York and they agreed to help right away. After three days of struggling with every method they could come up with, Bonnie was moved to her new home, at last.

The unbelievable cow is currently living at the sanctuary with plenty of love and care, surrounded by other rescued cattle like her. Maybe Bonnie and the deers are still missing each other a lot, but it’s obviously the life she deserves to enjoy. We are all happy for you, girl.

Just take a look at the charming Bonnie:

Please share the wonderful journey of Bonnie with your loved ones!

Birds Sing to Their Eggs, and This Song Might Help Their Babies Survive Climate Change

10+ Baby Animals That Will Give You Instant Heart Eyes

25 Unforgettably Sweet Pictures Between Wild Animals And Their Babies