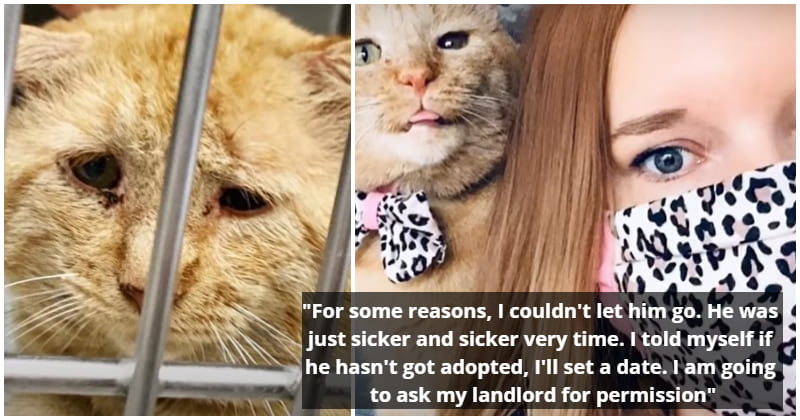 Bruce Willis was a stray cat who was found roaming on the street. He was diagnosed with a Feline Immunodeficiency Virus that degraded his immune system. No one knew what had happened to him and made the cat look sad all the time. His heartbreaking pictures went viral on the Internet, catching the attention of Sandra Daniloff, who later became Bruce’s mother. “I said like why am I putting myself through this, cause he looked even sadder in real life, especially at that time, I could only stay there for a couple of minutes because I got so sad, I almost started crying”- shared Sandra, when she came to the shelter with the cat.

Sadra’d love to bring him home, but her apartment didn’t allow animals. Without hesitation, Sandra texted her landlord with a photo of the sad cat Bruce attached. After thorough consideration, they sent her a message: “We will make an exception this one time if you’re sure that you think this is what you need to do!”.

The woman was so happy to receive the news and came to the shelter to take her cat home.

“I knew he would need a lot of medical care. But then, when I went to visit him the next day, looking in his eyes, I was so happy that I could get him out there.” Bruce is a smart boy. Coming home, he walked around the apartment for 10 to 15 seconds and realized that was his new home. The boy started lying on the floor and kept purring. He wanted to say: “Yeap, this is where I live now. I feel happy.” Bruce loved staying with his mom, being petted and cuddled.

Time passed by, and the saddest cat became unrecognizable for his changing appearance. He looked more cheerful and handsome. The boy had finished his treatment for eye and ear infections, and continued with FIV medical care. During the first weeks at the new house, he was scared of random objects, but quickly, the cat got used to them and felt excited playing with them. Bruce became attached to his mother, following her from room to room. “It’s so worth getting a cat that has been at the shelter for so long… Maybe it will demand more from you and might be more costly than other pets. But in the end, it’s always worth it because it gives you so much in return”, the woman told GMA. Thank Sandra for saving the cat and turning him into the happiest cat ever. Thank Good Morning America to bring us such a heartwarming story.

25 Photogenic Supermodel Cats Who Know How To Strike A Pose