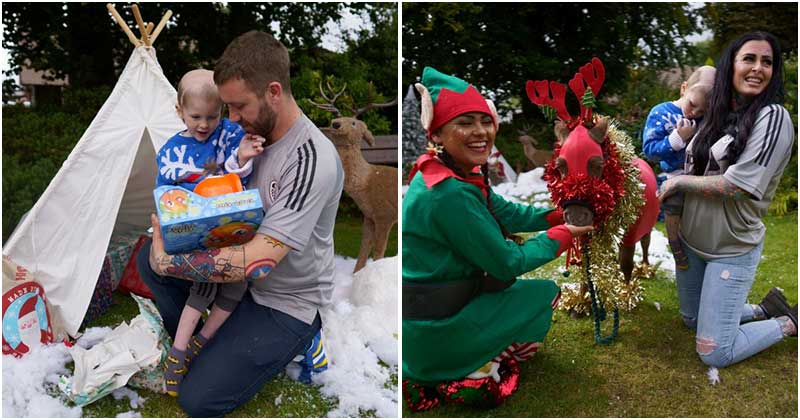 Nothing hurts us more than seeing our beloved leaving this world. Although we have prepared for their departure one day, this still breaks our hearts. And we will do everything to turn their last wish into reality. If it’s the only thing that makes them happy during the final days of their life, just do it.

It’s heart-wrenching when a mom is informed that her child doesn’t have long left to live. Laura and her husband, Ashley from Wakefield, West Yorks, experienced that pain. Their adorable 3-year-old son, Ellis, was diagnosed with a brain tumor in September 2019.

The brave little boy underwent two lengthy operations along with chemotherapy and radiotherapy. Although Ellis could return home after each procedure, complications from one treatment left him paralyzed. His condition even got worse.

In July 2020, doctors told Laura that her son’s cancer had spread and he had just weeks to live. It’s hard to imagine how heart-breaking it was when she heard the news. Her three-year-old son fought against terminal brain cancer.

Ellis is due to turn four on January 5, 2021. However, Laura and her husband intentionally held a superhero-themed birthday party for her son forward by five months. So in July 2020, the little boy celebrated his fourth birthday right in his hospital room.

That is not all, the parent organized an early Christmas party for their son. They arranged for Santa to call, dressed up a pony as a reindeer, and hired a snow machine for the festive spirit. Laura and her husband wanted to make it as perfect as possible. It was his last Christmas.

When the mother of Ellis’s roommate shared his story on her social account, it got the attention of millions. Messages, cards, and gifts from well-wishers from across the country were sent to the strong boy and his family.

Ellis even received video messages from some of the players from Leeds United, his favorite soccer team. His final days were beautiful and memorable. The boy left this world with his beloved family, neighbors and even strangers by his side.

“Your Kid Is Naked In Your Window:” Neighbor Sends Mom A Pic Of Her 2-Year-Old Boy, And Their Exchange Is Hilarious