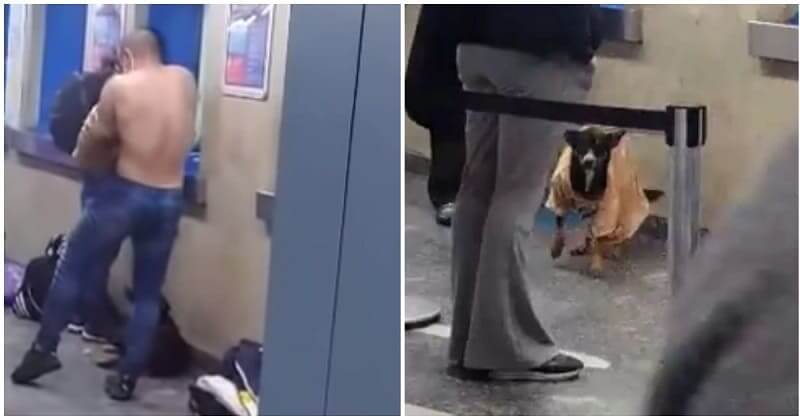 People agreed small gestures can make them feel more loved than over-the-top romantic gestures. That’s the reason why it’s always inspiring to witness kind-hearted people doing what they can to help stray animals who need a little help, whether by providing food, shelter or warmth.

Recently, Fernando Gabriel and his brother Felipe were in the subway station when they spotted a dog in distress.

“He saw a dog shivering in the cold,” Gabriel told The Dodo. “It was the coldest day of the year.” While Felipe went to purchase the tickets, he got up close the dog and knew he had to something to help the shivering animal. So he took him the shirt off his back and wrapped the shirt around the dog.

“I noticed my brother taking his backpack off his back and started filming,” Gabriel said. “He continued. He took off his jacket, sweatshirt and put his shirt on the puppy who was very cold. He did it spontaneously. It was very moving.” Fernando quickly caught the whole scene on video and shared it on social media, Felipe wasn’t expecting anyone to see that act of kindness, but his brother’s video took the Internet by storm, and people praised him as a hero.

“I rarely post anything to my feed,” Gabriel later wrote. “But it deserves to be shared.”

Here’s that heartwarming moment on video:

In the video, you can hear Fernando laugh when he sees his brother take off the shirt, he was touched by the sudden gesture of generosity.

As it turns out, the shirt Felipe gave the dog was actually one of his favorites. “It looks better on him,” he joked. “Help with that you have.”

The brothers said they later tried to return to the scene with the intention of taking him home with them, but sadly, they could not find him.

No matter what happened, Felipe’s gesture made the dog feel loved, warm, and comfortable. We are sure that the dog was clearly grateful for the gift. Felipe told The Dodo he regrets not being able to do more for that stray dog, but that he still hopes others might be inspired from what he did and help other stray animals.

“There is no way to change the world — but for the things in your reach, you can,” he said.

What an inspiring thing to do! Share this heartwarming story with your friends and family members!

20+ Dogs Who Never Think Of Giving Their Owners Personal Space