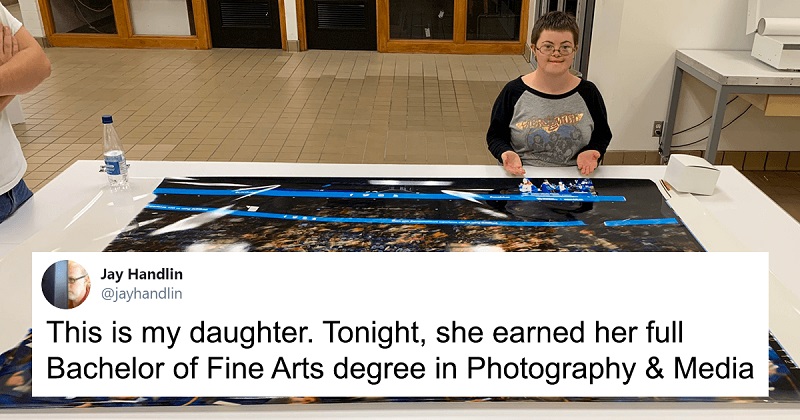 Raising our kids is a challenging yet rewarding process. Seeing them grow up healthy, leave home and have their own family. Nothing is better than that. This dad has the same story but his daughter is a bit more special. The little girl with down syndrome does an excellent thing in her life. She has just achieved her academic goals. Bachelor of Fine Arts degree in Photography & Media from California Institute of the Arts.

Although many official graduation ceremonies this year have been canceled due to the complex situation of coronavirus, it could not prevent parents from celebrating their kids’ success. You can see some parents congratulate the graduates via Zoom chat, others replicate graduation ceremonies at home. There are also parents who announce the news to social media to acknowledge their kids’ achievements. And some go viral for it. Jay Handlin recently became one such proud parent. His daughter Rachel has just earned a Bachelor of Fine Arts degree in Photography & Media from California Institute of the Arts. And his post has received millions of positive comments and shares. We all admire what he and his daughter has gone so far.

To commemorate the moment, he shares the news on his Twitter account. “I am officially the proudest father on the planet,” he said. The tweet has since reached over 220k likes and 19k retweets.

Jay has a lot to be proud of, as Rachel’s achievement is not an ordinary one. The young woman has Down syndrome but beats her odd, she has achieved her goals.

According to the Pediatric Therapy Network, out of the Down syndrome population, only one person in a million successfully completes a higher degree program.

Her father, who calls himself a fierce father and a disability/inclusion zealot, has been sharing her progress with snippets of Rachel’s photography to showcase her talent. Let’s scroll down to know more! Groom Kneeled Down To His Mother For A Dance, Making People Down Tears In Wedding Room

Single Dad Adopts 5 Siblings So They Can Grow Up Together

Injured Puppy Gets Rescued And Given Second Chance At Happy Life