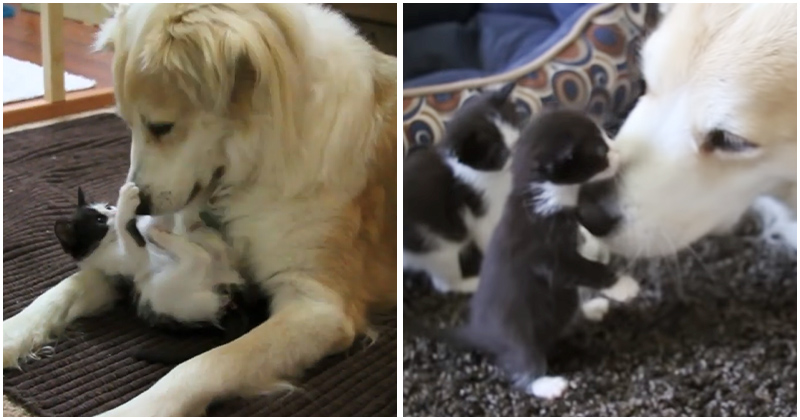 Some animals are really good at caring for others, they can make excellent parents and companions at the same time. Even when the ones they need to keep an eye on belong to another species, they can still nail the job much better than many humans.

Murkin the golden retriever – Australian shepherd mix is one of those affectionate and compassionate critters. The big boy was adopted from an animal shelter when he was 6 months old and maybe that’s the reason why he is always really sympathetic toward shelter animals just like him. As his daddy often fosters kittens of the Sacramento SPCA, Murkin happens to be the big brother of countless kitties in need.

These three bicolor felines are a few of so many cats Murkin has looked after. The poor litter was separated from their mother and abandoned at the local animal shelter, and thankfully they could be able to find the love and care they were longing for in an endearing doggo like Murkin.

These kittens were so small when they were abandoned by their owner:

Murkin was 9 years old back then. In contrast to the playful and energetic kitties, he was really calm and tender all the time. While the kittens played, he just quietly laid nearby, watching over them and made sure nothing bad could happen to his smol friends.

Of course, the cats wanted to have fun with Murkin too. His size didn’t even matter in these bold critters’ eyes, they trusted the dog unconditionally. Their bond was so incredible it could leave everyone in awe.

Let’s take a peek at their cheerful moment:

While these furry babies needed some comfort, Murkin was there for them too. He was like the loving mama that they would never have. If he ever had kids, he would be an amazing dad for sure!

Five weeks after these lovely moments were recorded, all of the kittens were strong enough to get sterilized and move to their own forever home. Murkin still continued his mission of fostering baby kittens though. To be honest, not many dogs could do the job as wonderfully as he does.

Look how sweet this dog is:

Please share this gleeful story with your loved ones!