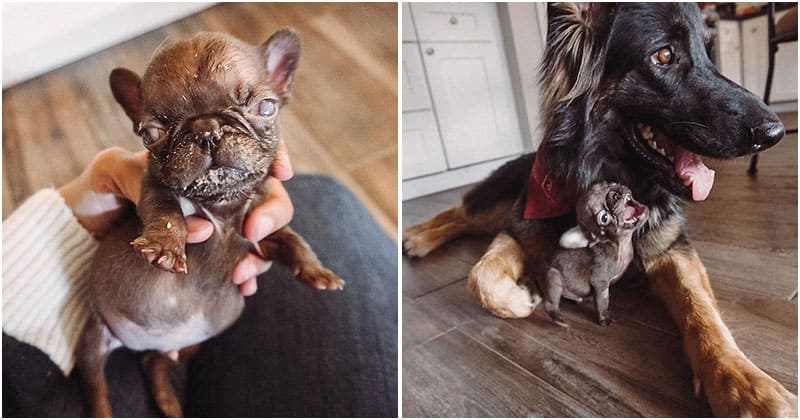 Meet Grogu, a Frenchie Bulldog who was surrendered to a rescue after his breeder found that the little boy had severe health problems. The rescue center thought that he needed a good place to get all things he needed, so they gave him to an experienced foster mom named Caitie.

When Grogu moved into his foster home, he was just 7 weeks old. While the normal size of a 7-week-old Frenchie is about 5 pounds, the boy was less than 1 pound. Not only was he underweight, he had some medical issues. He couldn’t see anything as his eyes completely clouded over. His head was so large and heavy that he couldn’t walk normally.

He was so small that he even fitted in the palm of Caitie’s hand. The tiny boy quickly captured his foster mom’ heart. Looking at his head, Caitie thought that he had hydrocephalus, so she took him to meet specialists, where he got medical treatment he needed.

Despite being tiny and underweight, he has no idea how small he is. He always thinks that he is a big dog who weights 300 pounds. He is spunky and feisty. Caitie has big German Shepherds in her house, but Grogu is not afraid of these huge friends and loves to play with them. Thankfully, these big dogs love the tiny pup and are so gentle with him.

After months of love and care, Grogu’s health is now better. His eyes have completely cleared up and he is able to walk normally. He is ready to enjoy his best life that he deserves. We hope that he will soon find his forever home, where he will be loved and cared forever.

Meet Wiley, The Adorable Dalmatian With A Heart-Shaped Nose And People Are In Love

15+ Photos Of Dogs Who Are Ready For Christmas