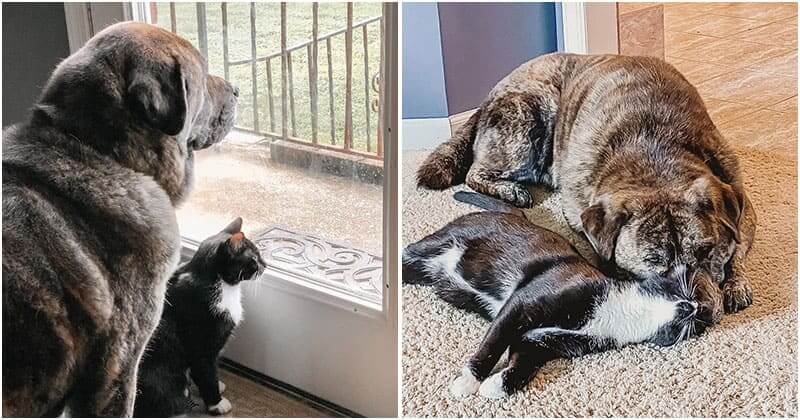 Blinkin is a blind kitten who was left on streets by his owners. When Melissa found him, he was just 5 or 6 weeks. She adored the kitten from the moment that she met him, so she took him home and gave him a second chance at life. Melissa has a big dog named JD who has very little awareness of his size. So when she brought Blinkin home, she was worried they would not get along well. As she thought, JD didn’t care Blinkin. He just turned his head and looked at other things every time she tried to get him look at the cat. However, Melissa still let them together because she believed that JD would not hurt Blinkin. Despite being blind, Blinkin is still sweet and playful. He was super excited to have a new friend to play with. Amazingly, JD didn’t hurt Blinkin. He just matched him. He just stood there and let the cat sniff him. He even sniffed him back and snuggled him with his nose a little bit.  At first, Melissa was nervous to let them play, but now they are best friends. Watch the video below to see the full story:

Blinkin is such a precious and adorable cat. He may be small but he is fierce. So glad him and JD the big, clumsy pup are now inseparable. If you love the two animals, you can keep up with them on Instagram! What do you think about this story? Let us know your thoughts in the comments below. Feel free to share it with your friends and family members!

10+ Cats Who Have Mastered The Art Of The Cat Nap

These Cats Are Very Proud Of Themselves For Doing Naughty Things