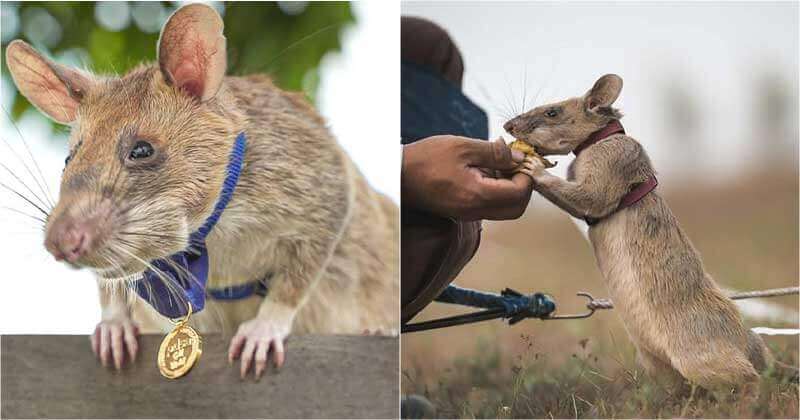 What do you think of when seeing an animal being awarded a medal for its exceptional performance at work? Admire them a lot, love and respect working animals more, right? Not only are humans dedicated to what they’re assigned to do but animals are also highly responsible for it. The story of Cambodian HeroRAT Magawa below make all fall in love with. Recently, Magawa the landmine-detecting rat in Cambodia has been a famous star on social media. Magawa has just been presented with the PDSA Gold Medal for his bravery and devotion to duty. Awarded by the UK’s leading veterinary charity, the People’s Dispensary for Sick Animals, this medal is the animal equivalent of the George Cross. Wining the PDSA Gold Medal, Magawa becomes the first rat in the charity’s 77-year history of honoring animals to receive this medal. The little brave animal joins the ranks of courageous dogs, brave horses, valorous pigeons, and an intrepid cat. Regarding its breed, Magawa is an African giant pouched rat. He was trained to detect landmines by charity APOPO. He is the most successful landmine-detecting cat of the charity. Till present, the heroic rat has discovered 39 landmines and 28 items of unexploded ordnance. The dedicated worker also cleared and made safe over 141,000 square meters (over 1.5 million square feet) of land for local people. His excellent performance and exceptional achievements can strongly prove that even the smallest animal can change the course of the future. Speaking to Bored Panda, PDSA shared that Magawa’s miniature medal was designed and struck by court jewelers and medallists Cleave & Co, who also created the Duchess of Sussex’s, Meghan Markle’s, engagement ring. “They make all the PDSA Medals,” the team said. “HeroRAT Magawa’s work directly saves and changes the lives of men, women, and children who are impacted by these landmines. Every discovery he makes reduces the risk of injury or death for local people. The PDSA Animal Awards program seeks to raise the status of animals in society and honor the incredible contribution they make to our lives. Magawa’s dedication, skill, and bravery are an extraordinary example of this and deserve the highest possible recognition. We are thrilled to award him the PDSA Gold Medal.” PDSA said. Here are other photos of HeroRAT Magawa! Stunning Plumage Of Yellow and White Flecked With Densely Black, Speckled Tanagers Stand Out In The World Of Birds

10+ Pets Who Love Their Owners More Than Anything