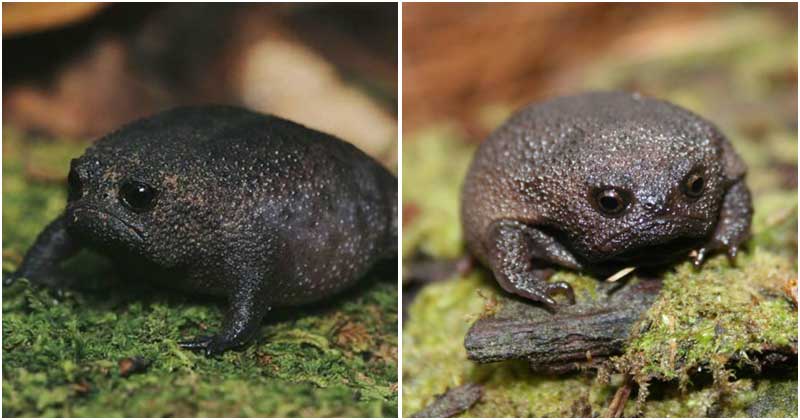 It’s not strange to see a cat with an angry or sad face. They seem to be “grumpy” all the time with every people they meet, even their owners. But this does not refer to their personalities. They are still adorable and affectionate. The structure of the face just makes them look different from other cats. And, people can’t get enough of this cute contrast. This also happens with the frogs, guys, African rain frogs, for example. These black frogs always wear a frown, making them conspicuous in their colony. Their frowning face doesn’t mean that they are actually disappointed or sad. It’s just how they look. Some people say that these African rain frogs look like angry avocadoes. Do you agree?

Another feature that makes a name for these frogs is their ferocious roar. They tend to be more aggressive, puffing up and enlarging their bodies when facing disturb or threat. African rain frogs are a burrowing species. They enjoy buried in sand dunes all day.

This species is endemic to a small coastal strip of land between the African countries of Namibia and South Africa. They are found on the southern slopes of the Cape Fold Belt in South Africa, at elevations of up to over 3,300ft (1,000m). These frowning animals live in fynbos and forest fringes. Female African rain frogs are active during mating season. They produce a sticky substance on their back called adhesive amplexus. This helps to prevent the males from falling off. Watch the video of this angry frog below.

If you want to read more articles about weird animals, just visit our website!

20+ Crazy Things Pets Did While Their Owners Were Away

Born With A “Squished Face” And Got Abandoned Twice, This Dog Finally Finds His Forever Home