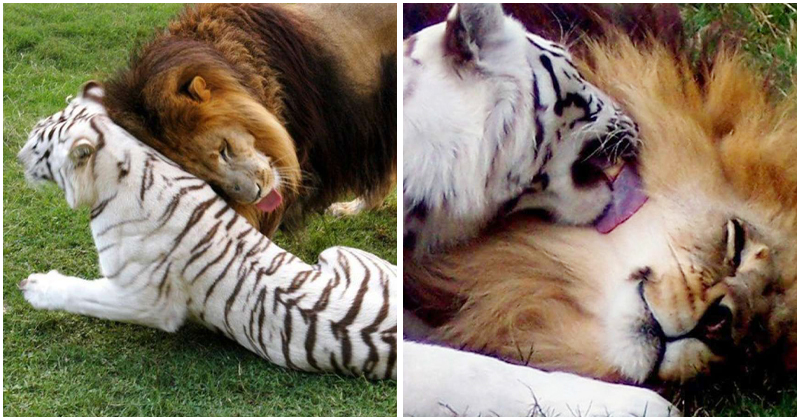 Love knows no boundaries and you can’t blame gravity for falling in love. It can happen anywhere, at any time and to literally anybody. For example, a lion and a tiger.

Cameron the lion and Zabu the white tigress were raised together at a roadside zoo in New Hampshire, New England with only one purpose: to give birth to ligers (the hybrid offsprings of a male lion and a female tiger) one day. Life in the zoo wasn’t easy, Cameron was 200 pounds underweight, while Zabu had a genetic flaw as a result of inbreeding (yes, white tigers like Zabu don’t even exist in the wild as they can’t hide from attack nor hunt their prey).

However, against all odds and despite all the obstacles, they were still madly in love with one another.

The unlikely couple was rescued by the Big Cat Rescue in 2004 when they were both four years old. Thanks to these kind-hearted rescuers, their lives were changed drastically. They even built a huge enclosure for them so these two love bugs could enjoy the freedom and live as happily as possible, with each other of course.

Zabu was the first one to be spayed, but it only worked a few years until she fell ill and Cameron started to become too possessive of his partner. As his aggressive behavior could harm himself and everyone around him, the keepers decided they have to neuter him or separate him from Zabu. It was easy though, Cameron was neutered, even when it meant he would lose his gorgeous mane.

After the surgery, Cameron became much calmer and the hair loss didn’t bother the lovey-dovey couple at all. They shared a happy life together for almost 20 years, until Cameron passed away in February 2019 due to liver cancer.

“We will miss his roars across Tiger Lake and his joyful antics with his toys,” the rescuers shared on their website. “We will miss seeing the love he and Zabu expressed for each other in daily baths and spooning naps. If ever there was a cat who should inspire us to end the practice of breeding wild cats for life in cages, it was Cameron.”

Zabu left this world only one month after his departure. And, as their rescuers wrote, “now they are together forever”.

Just take a moment to admire their beautiful bond:

Please share Cameron and Zabu’s touching love story with your friends and family.

A Bright Yellow Standout That Possesses The Skills Of A True Craftsman!

20 Hilarious Photos Where Pets Look Like Their Owners So Much

Elephant Prevents Her Human From Going Into The River Alone, And The Footage Is Heart-Melting