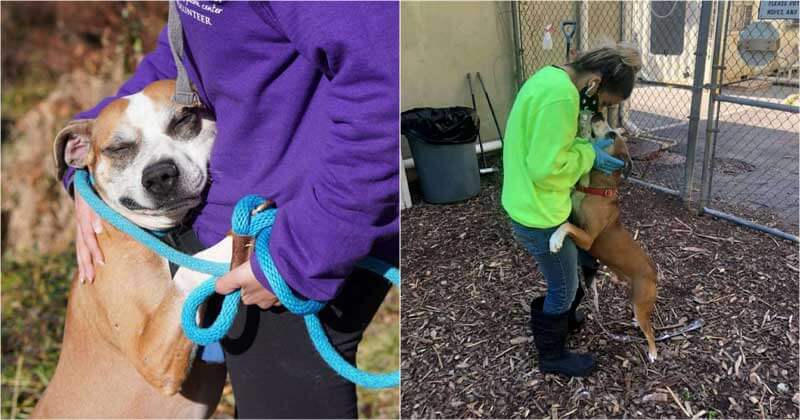 Love and kindness exist everywhere. A kind or lovely action, made by humans or animals, can make this world a better place. It shows their gratefulness to this world and inspires other people. If today is a bad hair day to you, just look at something beautiful and pure, the lovely actions of your dog, for instance. It will make you feel better. The story of the grateful rescue dog named Taro below surely melts your heart. He keeps hugging everyone he meets. An adorable way to comfort humans around him. Let’s give it a look! “Every time he comes out of the kennel, his first reaction is to hug the person walking him, and anyone, really, he comes in contact with” ❤️️????

Toro was found chained to a fence at an abandoned house last October. He was then brought to the Town of Hempstead Animal Shelter. His rescuers suspected that he’d probably lived outside his entire life, and knew that it might take him a little while to warm up to his new surroundings. “When he first came in, he was very nervous and shut down,” Melissa Fogarty, kennel and placement supervisor at Town of Hempstead Animal Shelter, told The Dodo. “He’s become more comfortable with people he’s used to, but is still a bit nervous in the shelter setting.” Toro gradually got accustomed to people and the living environment of the shelter. The boy seems to love to give. He showed his rescuers exactly how much by starting to give them hugs.

“I was probably one of the first people to take him out for an actual socialized walk when he came in,” Fogarty said. “The hugging happened probably within 15 minutes of having him out loose in our side play yard. He just kind of crawled up to me, climbed on my lap, and pressed himself against my chest … from there it grew and now he hugs all his friends here.” Even though Taro is still a little bit nervous about where he’s currently living, he’s so grateful to be someplace where he’s safe and loved, and reminds everyone of that every chance he gets.

“Every time he comes out of the kennel, his first reaction is to hug the person walking him, and anyone, really, he comes in contact with,” Fogarty said. The shelter helped Toro find a new home in January, but he was unfortunately returned after a week and a half because it wasn’t a good fit. Now, he’s still looking for the perfect forever home, where they love all of him and he can give hugs to the family every day to show how much he loves them. Toro wants to find an adult-only home with a family who can give him lots of structure and continue with his training. He’ll need to be crate-trained and taught the basic house rules, so he could do best as the only pet in his new home. Toro is more than ready to find his forever family after almost a year of waiting. The rescuers find it hard to understand why such a loveable dog who adores giving hugs hasn’t been chosen yet.

“I honestly think he hasn’t been adopted because he’s a middle-aged pit mix living in a high-intake municipal shelter,” Fogarty said. “He gets lost in this sea of dogs that don’t show well in their kennels.”

Sneaking Away From Home For An Adventure, This Dog Can’t Believe That He Has Been “Caught” Along The Way