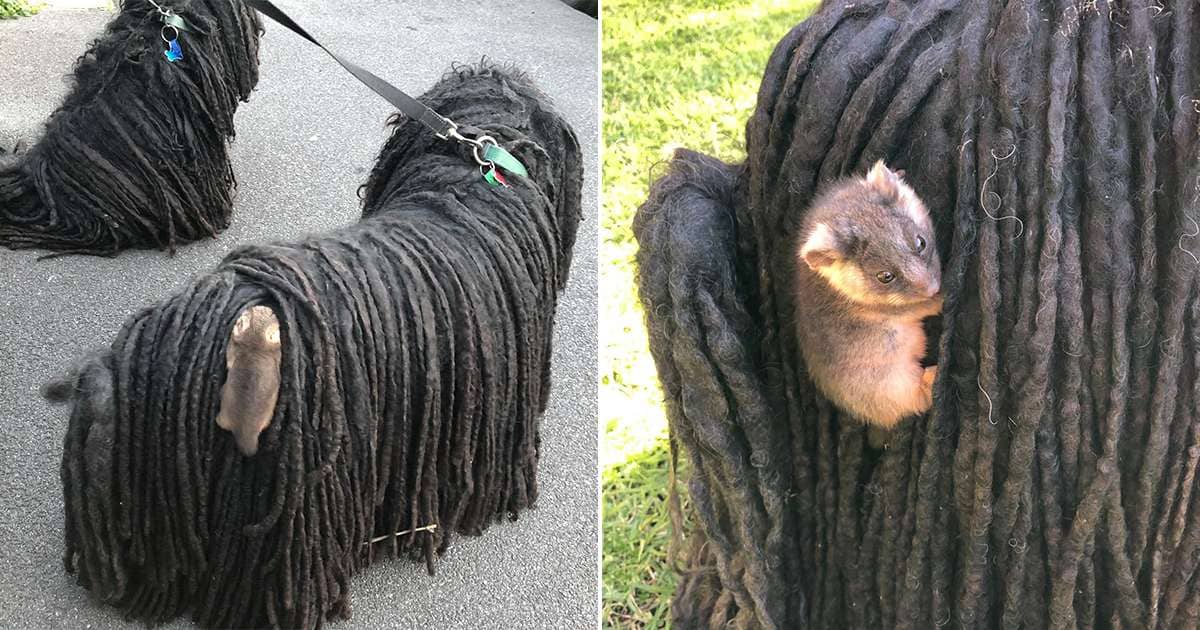 A Melbourne couple Sally and Jon Watkinson recently made an unexpected discovery when they found a baby possum clinging onto the back of their long-haired herding dog Kato. The animal nestled in the fur of the Kato’s corded coat while he was resting in his family home. The couple didn’t know how long the possum had been resting on Kato, but said he seemed unfazed by the hitchhiker. Dogs and possums do not typically get along, so Sally and Jon were surprised with Kato’s calm reactions to the little hitchhiker. “Hugo and Kato seemed to barely notice it was there,” Sally Watkinson wrote in a Facebook post. “It’s most surprising that Hugo was not barking frantically at it. Apparently, Kato was seemingly oblivious also.” The possum spent at least three hours clinging onto Kato’s long dread-locked fur, so Jon got in touch with wildlife rescues to help. The couple quickly took Kato to the vet with the possum still attached. After that, the little animal was checked for injuries and transported to the care of wildlife rescue. The young possum stayed at the vet overnight before being transferred to a wildlife carer. Watkinson noted that the possum will need to be cared before being released back into the wild if the real mother can’t be found. “I think he will be OK,” Watkinson wrote in a response to a Facebook comment. “[He’s] probably not quite weaned yet but seemed well enough and was clinging on for dear life. I think he found the right dog for that. His eyes were pretty bright still.”

UPDATE!!! It happened again!!! so bizarre. Today I went to Jon's house to pick to find Kato again with another baby…

Sally shared this incident on her Facebook page and it quickly went viral. If you love this story, please share with your friends to make their day better!

10+ Dogs Who Have A Strong And Irrational Fear Of Cats

17 Cats And Dogs Who Are So Proud They Have Best Brothers, Friends And Family