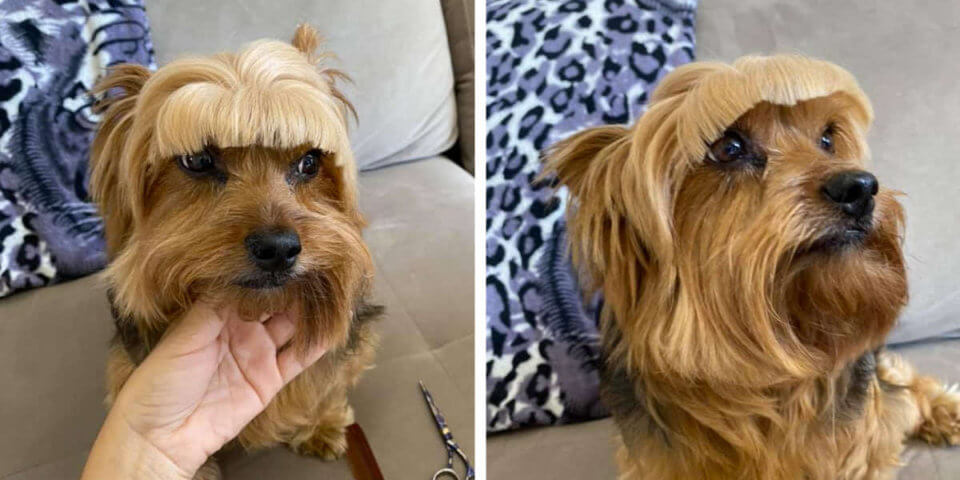 Due to the coronavirus quarantine, many salons and barbershops across the country have temporarily closed. This means your hair isn’t getting professional treatment any time soon. And of course, your beloved dogs are no exception. Instead of being groomed at salons, they have to be groomed at home. Recently, a cute dog named Mano has gone viral after his mom Susana Soares shared some photos of him and his new hair on social media.

Soares shared that she was hanging out with Mano, when she realized his hair had gotten rather overgrown. For this reason, she decided to cut his overgrown hair herself at home. “Hair was getting in his eyes,” Soares told The Dodo. “I decided to cut his hair at home.”

Soares is a hair stylist for humans, so she thought that cutting hair for Mano would be no sweat. However, she was wrong. Taking matters into her own hands, she quickly grabbed her hairdressing scissors and determined to help her boy out.

Not only did Soares solve Mano’s hair-in-the-eyes issues, but she also gave him bangs that inadvertently gave Mano a funny new look. It was almost as if Mano had cut his bangs himself without a mirror. Susana revealed that she ‘fell on the floor laughing’ after seeing her own handiwork.

“I fell on the floor laughing,” she said. The cut looks ridiculous, but luckily, Mano apparently quite likes his new ‘do, which at least allows him to see properly again.

“He likes it,” Soares said. Fortunately, when tussled, Mano’s haircut looks less silly. And in time, Mano’s bangs will grow back into a more natural look.

Soares thinks she will take him to dog grooming salon next time. “I will not be repeating that!” she said.

What do you do when you’re stuck at home social distancing and in desperate need of a haircut? Tell us your answer in the comments! Don’t forget to share this post with your friends and family members!