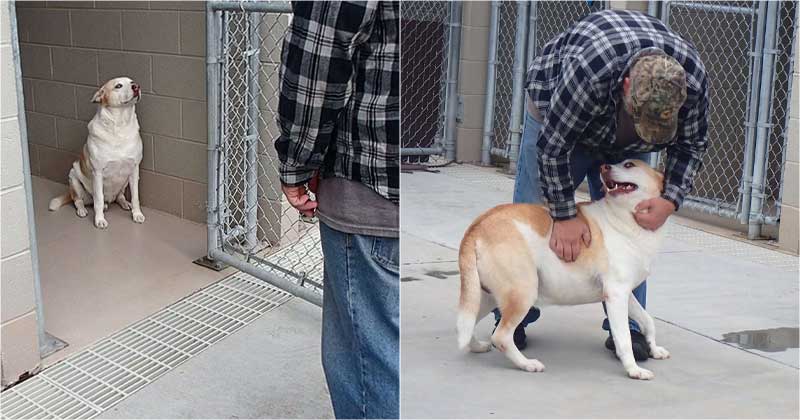 Every reunion is priceless. Nothing is better than seeing our beloved ones again, especially when we suppose that we lost them forever. The dog in this story is a lucky one. He finally reunited with his dad after 3 years of going missing from home. He made the very first smile, sad and happy when seeing his dad in person. Roscoe is the name of the missing dog. He had got lost from home 3 years before and lived on the streets, depending on the kindness of neighbors to feed him.

The poor dog was then brought to the Washington County-Johnson City Animal Shelter. But Roscoe kept living in his shell. He never smiled, never wagged his tail, no matter how many treats the staff and volunteers at the shelter gave him. Nothing could make Roscoe smile. He didn’t want to interact with anyone at the shelter, making them try in vain. He missed his home so bad, missing an important part in his life. “The entire time he was here he was very timid, very reserved … it was like he didn’t have a personality,” Tammy Davis, the shelter’s director, told The Dodo. “He wasn’t acting like a dog.” But the shelter staff didn’t give up. To help the reserved dog, they decided to share his story and photos on their Facebook page. They hoped that it could help him find his family.

And this small act changed Roscoe’s life forever. They soon received a message on their Facebook from a man read: “I think that’s my dog and he’s been missing for three years.” At the beginning, David was skeptical. But after the man immediately sent her a picture of Roscoe and his distinctive markings, she let him come to visit Roscoe. He was curious about whether the dog could recognize the man or not.

“The rest of us backed away and let the gentleman in there with Roscoe and it was just amazing,” Davis said. “It was like something clicked and he was like, ‘This is my person, my daddy.’” And the dog finally found his dad. He was shocked for a few seconds then he kept wagging his tail, jumping up, and going around his dad. You can watch the touching reunion here.

So it was obvious that this was his owner, it just took him a few minutes to realize who it was, and then he knew instantly.” David continued. The timid and reserved missing dog smiles for the very first time after separating from his dad. A much-needed smile that ends his sad boring days of getting lost.

Roscoe can eventually come back to his home, reuniting with his dad. Hope to hear and see more updates about him.

Man Gets A Tattoo He Found On His Rescue Dog, Instantly “Regrets” It