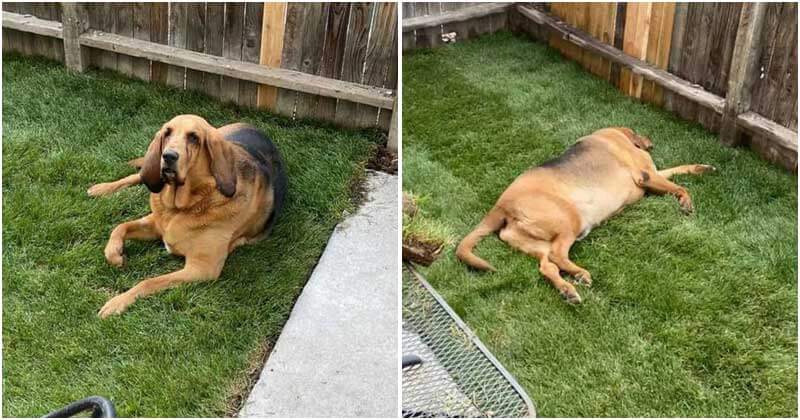 When KaTarra Taylor adopted Bentley the bloodhound, she decided to give him everything he needed. And she did. However, KaTarra soon faced quite the problem. No landlord was willing to let her and her new buddy rent the house. So, she took matters into her own hands. “I bought a townhouse in 2018 because no one would rent to me with a dog Bentley’s size,” she spoke to Bored Panda, adding that her new buddy Bentley got excited to move into their new home. “He loves wherever we are because I’m there as well.” Soon, she and her dog were joined in the house by KaTarra’s boyfriend Nick and his dog as well. But the woman wanted to do something more to delight Bentley with another surprise. She knew that Bentley was engaged in chilling in the grass. Whenever they would go for walks or to the park, she would see him laying on a cozy patch of green. So she really wanted him to have some of his own to comfort at home. When Nick offered a helping hand, she decided to transform their concrete patio into a grass yard that her dog had never had. Nick is a disabled veteran with nearly 12 years of service. The man did an excellent job. “Bentley loves his little grassy area. We’ve even added a canvas shade for him. Nick really went above and beyond on this project” When Bentley saw the grass yard right in front of him, he can’t wait laying down and kept staying there for several hours. It’s definitely his new oasis. It should also help the bloodhound deal with his anxiety issues. Even though he still struggles, his mom said he’s getting better every day, and it’s easy to see why. All of the love Bentley receives has to be working wonders for him. Here’s how the internet reacted to this story