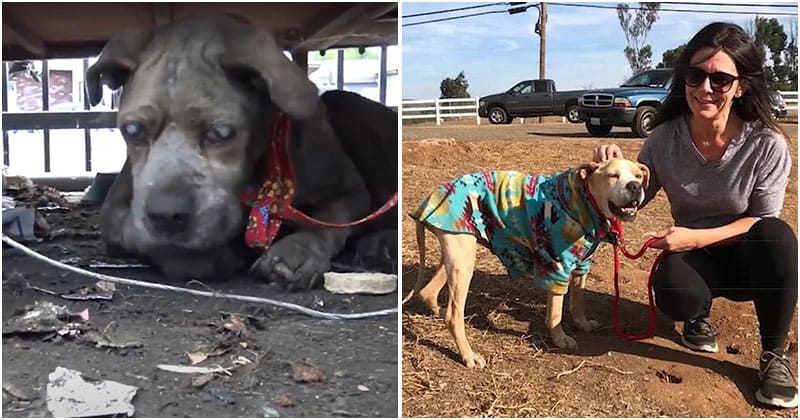 This blind senior dog was found hiding in a junkyard by some guardian angels. Looking at his situation, everyone thought that he was abandoned and abused by someone. Due to living in a terrible condition for many days, he was sick and tired. He seemed to lose his hope and leave his life to fate. But thankfully, his life has completely changed after he met these angels.

Realizing that the old dog was in need of help, they called Hope For Paws for help. An employee begged rescuers to come before her boss called animal control. The rescuers were scared that he wouldn’t last long in a public shelter, so they immediately came to the junkyard to save him. With the help of employees, the rescue team quickly found the dog hunched under a shed.

After a lifetime of abused and neglect, he was in a bad shape. Despite having a horrible life in the past, he was still gentle and sweet when the rescuer tried to free him. They cut him loose and took him to a vet clinic. They didn’t forget to give him a new name Duncan and comforted him on his way to the vet.

The doctor checked on him and said that Duncan was completely blind and was dehydrated. Some tests showed that he had multiple ulcers, gum disease, two mass cell tumors and a skin infection. Because of his health problems and his pain, the doctor recommended to put him down. However, the rescuers refused to do it. They wanted him to be loved and care in his last days.

They took him home and gave him all the best things he needed. They also gave him medical treatment and care with the hope that he would heal and regain his health. After a few days, the rescuers thought that Duncan needed a better place for his situation. For this reason, they contacted the Frosted Face Foundation, a rescue organization that is dedicated to caring for elderly dogs.

The organization was happy to welcome Duncan into their family. Thanks to all the love and care from his foster parents, the old dog now becomes a happy and healthy dog. After everything happened to him in the past, he is now enjoying his best life that he deserves and knows how it is loved.

Thank you so much for saving Duncan and giving him a second chance at a new life. If you love this post, please share it with your friends and family members!

Allowed To Jump On Bed For The First Time, Little Dog Plays On It For Hours And Refuses To Leave

Loyal Dog Doesn’t Realize His Owner Has Gone Forever, Still Waits For Him Next To Empty Hospital Bed