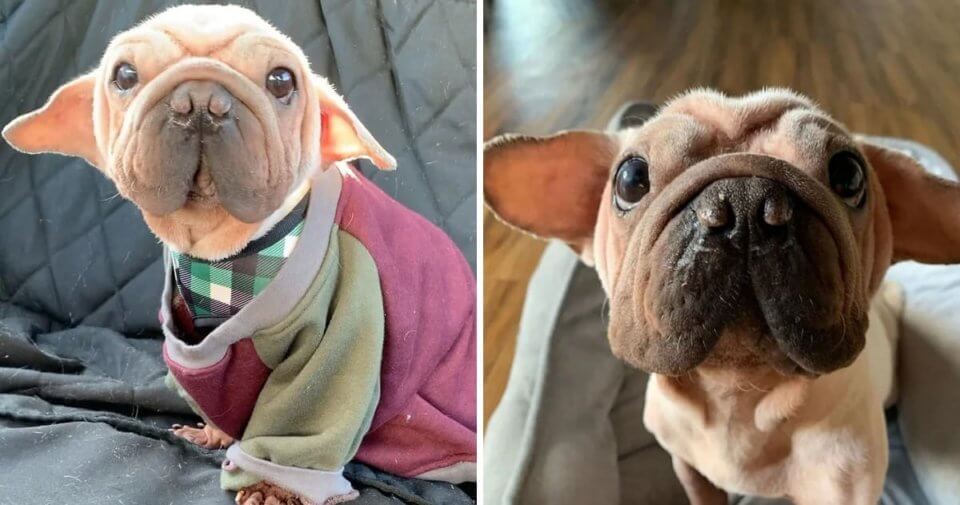 Do you remember Joy, the rescue cat with an uncanny resemblance to the green alien Baby Yoda from “Star Wars”? With enormous ears, big, round eyes, and little button nose, Joy has won everyone’s hearts on the Internet, especially cat lovers. We think that dog lovers might be green with envy when feline lovers have a special cat. But recently, dog lovers have also been filled with joy because there’s a dog named Mork Skywalker, who looks exactly like Baby Yoda. Mork was rescued in October by HarbinSHS – an organization that is dedicated to saving dogs destined for the horrific meat trade in China, where it’s still legal to eat and sell dog meat. Although he had quite a rough start to life, he is still an adorable pup with his big, expressive eyes and pointy ears. He weighed just 5 kg when he was saved and subsequently had to be hospitalized for some life-threatening illnesses and intestinal problems. After being informed about the rescue mission, the founder of nonprofit rescue shelter Roadogs, Nikki Carvey, decided to adopt and move him to Los Angeles where he would be loved and cared. “HarbinSHS saves all breeds, and we focus on bringing the bulldogs to America. They sent me a photo of Mork, and I said, ‘I love that dog. I will take him,” Nikki Carvey said. Since arriving in Los Angeles after his rescue in China, Mork has managed to make significant progress and even gain weight! “He eats a cooked food diet because of his irritable bowel syndrome,” says Carvey. “He has a special diet of lentils and various supplements. He’s an expensive little guy to feed. He probably eats better than I do. He’s still extremely underweight, and he gets fed four small meals a day.” Mork’s new owner created an Instagram account for him, where he has won himself plenty of fans. They adore him and even have compared him to the Baby Yoda from “The Mandalorian.” Carvey hopes Mork one day can work as a therapy dog, so he can help others heal. With his adorable face, we believe that this little sweet pup will someday become a great therapy dog.