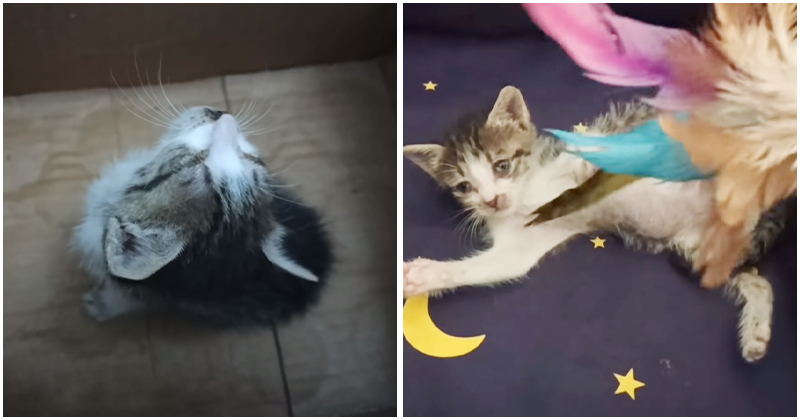 People often say that saving one animal won’t change the world, but it will change the world for that one animal. And thanks to kind-hearted rescuers around this world, so many animals’ worlds have been changed in a wonderful way.

Lily Ivo is no professional rescuer, but she is a kind lady who does everything she can to help all the cats in need around her. The Indonesian woman had spent over 20 years feeding stray cats in Abu Dhabi, the UAE and now as she’s back to her homeland, she still devotes her precious time to take care of these adorable creatures.

Tobby is one of the lucky kitties who live under the care of this amazing woman. Two boys in the neighborhood had found the kitten in a box on the streets and brought him to her home. The first time they met, Toby was in very bad shape with two tightly shut eyes and some other health issues. His condition was so awful Lily even thought that he was blind in both eyes.

After taking the poor baby in, Lily immediately used warm water to clean his eyes and thankfully, it was just temporary blindness and was totally treatable. Tobby could still open his eyes.

Lily quickly applied ointment on his eyes, clean his ears and fed him. She didn’t bathe the kitten because he was too weak, but fortunately he still had a good appetite.

After two days, Tobby finally got better. He started to play around and make friends with other cats in the house. He even found himself an incredible big brother to hang out with – Tommy (yes, their names match).

After a quick visit to the vet to get him dewormed, Lily was so relieved to learn that Tobby had recovered quite well. The little boy got to stay with her in her home of course.

Let’s take a look at the whole rescue here:

To keep up with the sweet and playful Tobby, please check out his other videos here and here.

And last but not least, don’t forget to share this touching story with your friends and family!

10+ Photos That Show Cats Are The Best Subjects To Photograph

Woman Walks Into Animal Shelter And Gets Adopted By A Cat

20+ Funny Cat Memes That Will Give You A Good Laugh