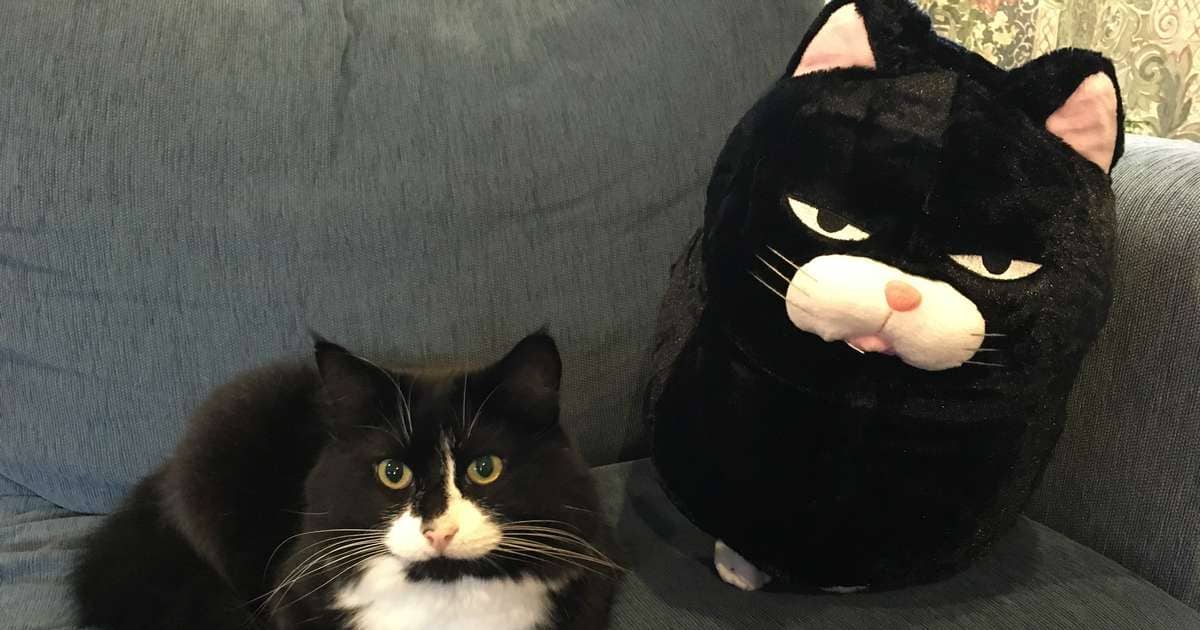 Meet Harry, an adorable tuxedo cat who lives with his mom Beka Smyth in their loving home. Although he looks very grumpy and unfriendly, he is still a sweet and playful cat and you’ll fall in love with him at the first sight. “Harry looks like he hates everyone and everything a lot of the time, but really, he is the clingiest, cuddliest dude ever,” Beka Smyth, Harry’s mom, told The Dodo. “He likes to be involved with everything I do, will call out for me if I leave the room and he doesn’t know where I’ve gone, and since he was a little tiny kitten he’s slept pretty much directly on my head at night.” Recently, Smyth bought a gigantic cat pillow which made her stop dead in tracks because it looked just like Harry from the shape, color to the grumpy expression. Smyth didn’t hesitate, she immediately brought it home, introduced the pillow to Harry. However, everything didn’t happen as what Smyth imagined. “Harry’s response was a little unexpected. I thought that he may freak out at the sight of it, but instead he kind of just looked at me as if to say, ‘Is this some kind of joke?’” Smyth said. However, Harry started being curious about the pillow and being obsessed with it. “He spent the entire day sitting next to it on the couch — only hopping off to investigate what I was doing in the study every now and then — and he’s been sitting next to it a lot of the time ever since,” Smyth said. Harry is now enjoying a happy life with his best friend and his mom. He spends as much time with his new friend as possible and their friendship is inseparable. 23 Pets Who, No Matter What, Are Just So Cute In Their Owners’ Eyes

Cat Loses Her Mind After Seeing Rain For The First Time

Meet George, The Adorable Cat Who Loves To Stand On Two Legs Like Humans Do