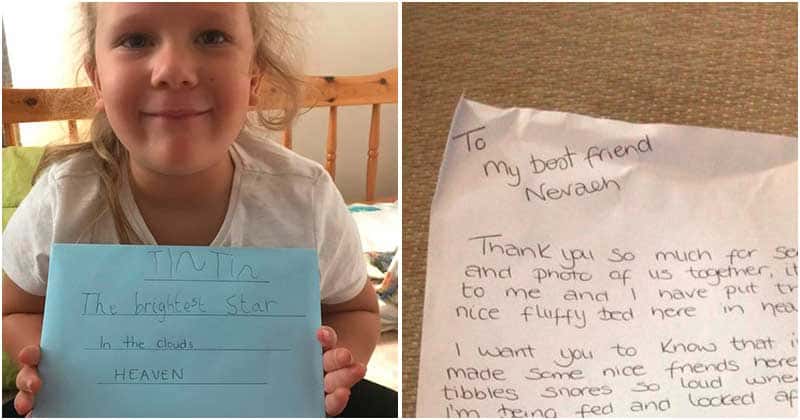 Get your tissues ready, because this letter will certainly make you cry.

Saying goodbye to a beloved pet is always difficult for everyone, but for children, it can be even worse to get through the grief. So when a five-year-old girl from Walton-on-Thames, UK, lost her beloved pet cat and best friend, she was left devastated. The distraught little girl named Nevaeh Lowe had always had a close bond with her cat, Tin Tin. From the very start, they were inseparable friends. Where one went, the other was sure to follow. Nevaeh’s mom, Tamara, told The Mirror, “Nevaeh and Tin Tin were best friends, they had a really close bond, whenever they saw each other they were so happy.”

But sadly, Tin Tin passed away from heart failure, and Nevaeh had a hard time adjusting to life without her buddy. Nevaeh was worried about how Tin Tin was getting on in heaven, so she decided to write her cat a letter, enclosed with a photo of them. She just wanted to make sure Tin Tin was doing fine up there. “I miss you so much, you are the best cat ever, I love you and I will never forget you,” wrote Nevaeh’s letter. She also included a photo of them together for Tin Tin to keep. “I have a photo of you and now you have one too, love, Nevaeh.”

After seeing the letter, Tamara told her daughter that heaven might too far away to send a letter and it might not be able to get all the way to Tin Tin. But Neveah insisted, so she decided to drop it in a Royal Mail postbox. “When we sent the letter I didn’t expect anything to come back and I don’t think Nevaeh did either but it was important to her to say farewell,” Tamara said.

Amazingly, they received a parcel in the post a week later. As it turned out, a postman at Royal Mail wrote a reply back to Neveah after receiving her letter. “I want you to know that I’m OK and have made some nice friends here, one of them called Tibbles snores so loud when we have cat naps. I’m being fed and looked after well by the angels. I know you are sad that I’m not there with you but please don’t be. In here is a little cuddle cat that I thought looks a little like me. So if you do feel sad you can cuddle him like how we used to. If you need me, just look for the brightest star in the sky at night and I’ll be there to listen. Forever your best friend, Tin Tin.” He wrote her a message from Tin Tin, explaining that Tin Tin had to go to heaven and Nevaeh didn’t need to worry about her. He even sent her a toy cat and a book to read with her mom whenever she missed the cat.

Tamara said: “I was gobsmacked when the parcel arrived, it was so moving to open it with Nevaeh. Getting a response was the last thing we expected, and I’m just so thankful to the Royal Mail and the postman for writing that letter and sending it to us – and of course for the toys too. I think she really needed some closure so she could start to move on after Tin Tin, and what this postman has done really did that for us.” “I tracked down the postman that did it and although I didn’t get chance to speak to him, I did speak to his wife, and they have cats too so totally understood why Neveah was so upset.”

After Tin Tin went to the heaven, Neveah was struggling to sleep. But since the letter came back she has been so much happier. “It has really helped, her sleeping is getting back to normal and now that she knows Tin Tin is OK she is starting to get over the loss and be a bit happier.” Tamara said. “She really needed one final goodbye, and to know that Tin Tin was ok without her and being there to look after her. Every night now she looks up and says goodnight, and knows that Tin Tin is looking back at her – and that lets her knows she can head to sleep.”

Love this touching story? Let us know your thoughts in the comments below! Don’t forget to share this post with your friends and family members to make their day warmer!

This Lap Cat Decides To Become A “Cap Cat”