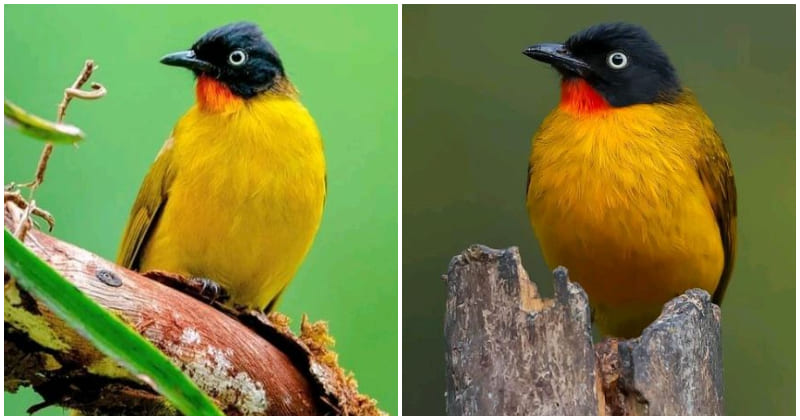 The diversity of passerine birds never ceases to amaze us, humans. Putting on one-of-their-kind coats, these flying creatures shine brightly in nature. They add more brilliant colors to nature and liven it up with their songs. It’s understandable why many people are engaged in watching and photographing birds. The flame-throated bulbul is one of these stunning passerines. It has a golden-yellow belly and fiery red throat that creates a striking contrast with the black head. Meanwhile, the back, wings, and tail are covered in olive green. We do believe that you won’t keep your eyes off this bird! Additionally, this species has beautiful eyes whose iris is white, sometimes appearing pale blue. Its bill is dark brown to black. You can watch the video of this gorgeous passerine below!

Like many other passerines, the male and female flame-throated bulbuls are indistinguishable. However, they can also inhabit the lowlands and foothills of the Ghats up, from 900m to 1200 meters above the ground.

When January comes, this passerine starts its breeding season. It lasts until August when the hatchlings are fully-fledged and leave their parent’s nest. After finding mates, the female builds her nest in the fork of a suitable tree. This nest is made from yellow, dead leaves, cobwebs, grass stalks, and softer grass and takes 6-10 days to complete. The female then lays eggs in her nest and incubates them for 18-20 days. The male doesn’t join his mate in this process but he assists her by feeding her and chicks once they hatched. Regarding the diets, flame-throated bulbuls dine on a variety of foods, including insects, figs, and berries of various scrub plants.

10+ Photos Of Animals Who Have A Great Friendship