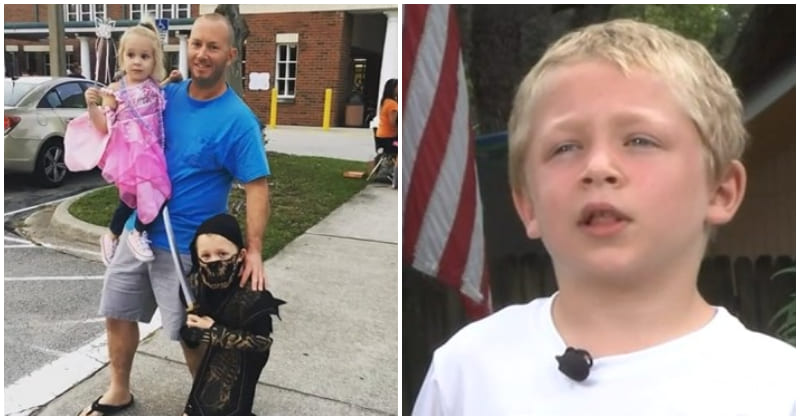 When the lives of your loved ones are in danger, you would do everything to save them, even sacrifice your life. A pregnant mom can stop her chemo to protect her unborn baby. Likewise, a boy, seven years old, is able to swim for an hour in strong currents to save his dad and beloved sister. That seven-year-old boy is Steven Poust, a hero of his family. The family was on a boating trip for Memorial Day weekend when an incident happened. On St. John’s River where they were enjoying their trip, father Steven anchored down the boat so that his children Abigail, 4, and Chase, 7, could enjoy some swimming.

Nothing bad would have happened if the current hadn’t been so strong. It blew Abigail away, and her brother, Chase, accompanied her to avoid the little girl from drifting. However, the kids were unable to protect themselves without the help of father Steven, who left the boat soon after that. Telling the media, Mr. Poust said he was sacred because at that moment, he was unsure what was going to happen to his two sweethearts. Chase was told to swim to shore while his father tried to reach the daughter, who was wearing a life jacket.”I tried to stick with both of them. I wore myself out. She drifted away from me.” Poust explained.

Listening to his father, the seven-year-old spent one hour under the water to swim to the shore. CNN News asked the boy whether he felt tired while swimming, Chase confirmed he did, but at the same time, shared how he doggie-paddled to preserve energy throughout the route.

On reaching the shore, brave Chase Poust used up all of his strength to search for help. “I screamed for help at the top of my lungs and waved my arms and sure enough someone heard us,” he said. Jacksonville Fire and Rescue Department (JFRD) was dispatched to the boat’s location and rushed there. When they arrived, Steven and Abigail had drifted approximately one and a half to two miles away from the boat. Steven and his daughter were saved in time. The courageous seven-year-old boy was hailed internationally as a hero for his sacrificing behaviors. The story showed us that human ability is unlimited with the power to love and survive.

Dad Uses 3D Printer To Make Arm For His Son, Then Makes One For Girl After Reading Her Story

Mom Didn’t Give Her Son With Down Syndrome Away As Doctor Suggested, And Now She Celebrates His 63rd Birthday