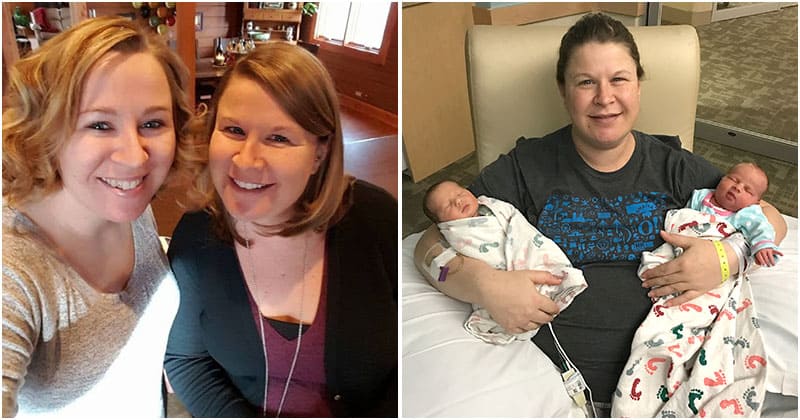 Having miscarriage can be an emotionally and physically draining experience for the father as well as the mother. A time of miscarriage is too sad to break any couple. But for Melissa Kayser, she and her husband had to deal with this great sadness up to 9 times.

She had been trying to have a baby for three years and tried fertility treatments and IVF. Sadly, all of treatments were failed. That’s when doctors suggested that she should consider a surrogate mother. That said that this might be the best option for her.

“I was devastated because you think as women we are literally born to do one thing and that’s to reproduce and when you can’t do that one thing you feel like a failure. I didn’t know if I could emotionally handle another woman being able to carry my child,” Melissa said.

Melissa wanted to be a mom more than anything. But after nine miscarriages, she seemed to lose all hope of ever becoming a mom. However, her hope was regained when her big sister, Lisa Auten, stepped in and offered to be the surrogate in a semi-serious way.

Lisa said that she couldn’t bear watching her sister go through loss after loss, so she decided to carry a baby for her. Before becoming her sister’s surrogate, Lisa had never been married or pregnant. Although she loved being pregnant, she has no desire to be a mom herself.

“She tries to make a joke out of everything and she said, ‘I’ll let you borrow my uterus,’ I can’t remember how she phrased it,” Melissa elaborated with a laugh.

Kayser took up her sister’s offer and had two of her embryos implanted in her sister. Nine months later, Lisa had twins, and Melissa was finally a mother. She was extremely grateful to her big sister.

Although the twins are biologically Kayser’s, Lisa was the mom listed on the birth certificate. For this reason, she has to relinquish her parental rights to allow Kayser to ‘adopt’ her children when they are six months old.

If you love this post, please share it with your friends and family members to make their day!