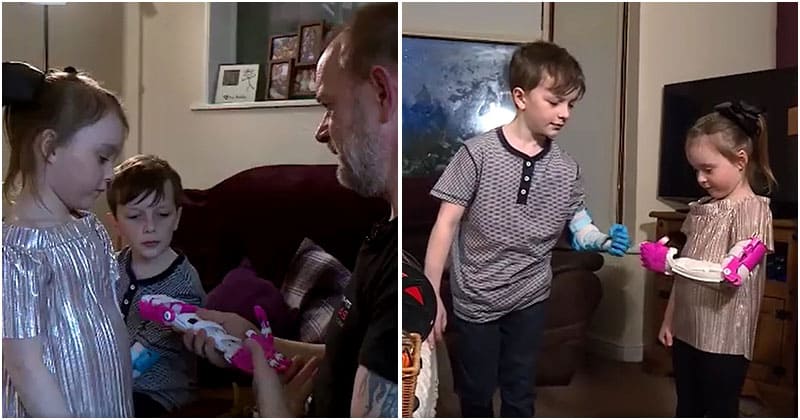 Jamie Miller is a young boy who was born without a left hand. For this reason, he doesn’t know what it feels like to use both hands and his life is very difficult. Despite having only one hand, he never lets it stop him from exploring this world and doing everything like other kids. He is always been out playing with friends and enjoying his life.

Not only does Jamie have a great will and effort, but he also gets all the help, care, and support from his beloved family members, especially his great dad Callum Miller. At the age of 10, his life has completely changed after his dad made a 3D arm for him. Thanks to his dad’s idea, Jamie can now hold things in his false left hand and even catch a ball – something he never thought he could do.

At first, Callum messaged Team UnLimbited who make robotic limbs and asked them to make one for his son. Unfortunately, there was a long waiting list for their printers, so he decided to do everything by himself. After consulting social media groups, he bought a 3D printer and started to turn his idea into reality. After failing several times, he successfully printed out a false hand for his son.

However, not only does the great dad help Jamie’s life easier, but he also helps a six-year-old girl who is the same situation as his son. Keira Campbell was born without a left hand and couldn’t have a prosthetic limb due to being too young. After he saw her story on Facebook, he decided to help.

With the help of Callum, Kiera can now hold things properly which she couldn’t before. She’s becoming more independent as she’s getting used to using the 3D hand day by day. She is overjoyed to go to school and play with her friends.

Watch the video below to hear Keira and Jamie talk about how their lives have changed after using the 3D printed hands:

What do you think about this post? Let us know your thoughts in the comments below and don’t forget to share this post with your friends and family members to make their day!

Cats Left Outside Pet Store With Note: “Understand Before You Judge”

Hero Husky Finds A Box Full Of Near-Dying Kittens In The Woods, Becomes Their New Mom