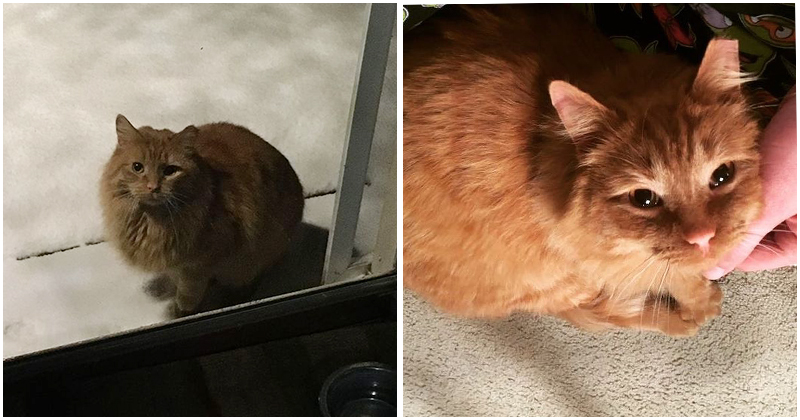 This story is about a surprise guest who changed a man’s life. Alex never thought of himself as a cat person, until this stray tabby showed up at his door and looked right in. “I would be eating lunch or something, I’d look out the window and I’d see a cat looking in,” the man recalled. “And I thought “oh maybe he wanted inside”, so I’d walk up to the door and he would see me and run away.” The ginger cat was clearly afraid of humans, but he kept coming back every day. Alex thought that he belonged to one of his neighbors at first, but then he noticed his super-thin body and then suddenly realized he was starving and definitely needed some help. So, the kind man began to put a bowl of food in front of his door each day so his new friend could stop by and enjoy himself there.

The hungry cat did accept his food, but he was still scared each time he saw Alex through his glass sliding door. Since he always ran off whenever Alex tried to approach him, the man was quite upset. “I would have dreams that I would actually be able to pet him,” he said.

As time went by, the stray cat gradually became a frequent visitor. He got used a little bit to Alex’s appearance, too. It didn’t take long for the doubtful kitty to comfortably eat with that man looking at him through the glass, and he even put on some weight and appeared to be healthy again. But then winter came and it was snowing outside. It started getting cold, so Alex helped the cat build a small, cozy house that could shelter him from the elements. He was overwhelmed with joy as he saw the cat sleeping inside that house.

“It was either the same night or the night after I put it out there that I remember seeing him sleeping in it,” he said. “And I thought that was really cute.” Eventually, after months of feeding the cat, Alex managed to lure him in with treats. Yes, that how this little feline got inside his house for the very first time. And to Alex’s surprise, he even let the man pet him. “I was still afraid to touch him, even though I’d think he was okay,” he continued. “Then he finally brushed his head against my arm and that’s when I knew it was probably OK for me to pet him.”

Needless to say, the charming kitty got to stay with Alex in his house. He was named Cinnabon, isn’t it sweet? For more delightful moments of Alex and Cinnabon, visit their YouTube and Instagram. And last but not least, don’t forget to share this lovely story with your friends and family!

10+ Of The Cats With The Most Adorable Smile