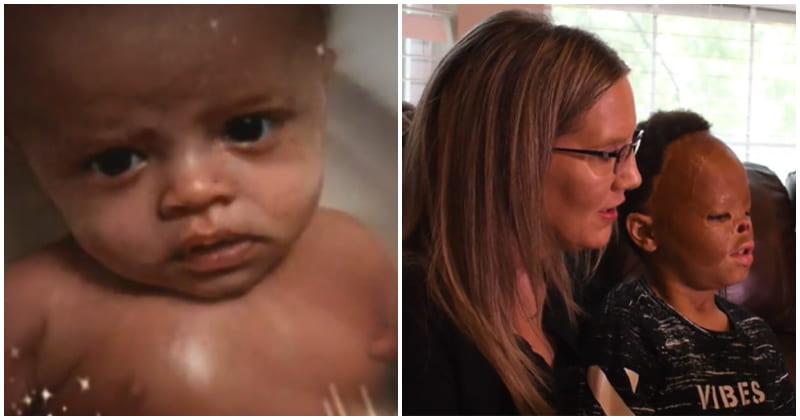 In September 2020, a baby boy badly burned in Raymore seven years ago got adopted by his foster mom.

Deyvion Plunkett was just a toddler when a fire started in his apartment in 2013. Although he was luckily a survivor, the boy suffered horrific injuries on his face. Deyvion experienced some of the hardest days of his life while no one stayed beside him. All he had was the doctors who tried everything in their power to give him a second chance.

It wasn’t until 2015 that Deyvion finally became a part of a family that he could call his own. He lived with a single mom called Beth Plunkett before officially getting adopted by her in 2020.

In his room, Deyvion pointed to photos of people hugging him and standing beside him: “That’s my brother. That’s my sister. That’s my mom. That’s me,” Meanwhile, his foster mother, Beth, told WGN9 News how special he is to her: “I thought he was a beautiful little boy, and I fell in love with him very quickly. I feel everybody says, ‘Oh, he’s so lucky to have you and what you’re doing,’ but I’m, I’m just as equally lucky to have him.”

After 2,545 days, Deyvion finally became Beth’s legal son. That day was a special one because he shared his joy with the firefighters who had saved his life seven years ago. On social media, a picture was posted in which Deyvion, with a jacket and a hat made just for him, stood with his rescuers and smiled happily.

“I want him to be, most importantly, just happy,” Beth said. “And I want him to always feel loved and to just … to have goals and like, reach them and just do amazing, amazing things. And I know, I know he will … God definitely has an awesome plan for him.”

Now, Deyvion has a loving family with a mom and two siblings. We are very happy for the brave boy and his new life.
h/t: Bored Daddy
Watch the full video here:

Single Dad Can’t Stand Seeing Five Siblings Crying When They Live Apart, So He Adopts All Of Them

Dad Blames His Son For His Impending Divorce: ‘We Were Happy Before You Were Born’

Mom Didn’t Give Her Son With Down Syndrome Away As Doctor Suggested, And Now She Celebrates His 63rd Birthday