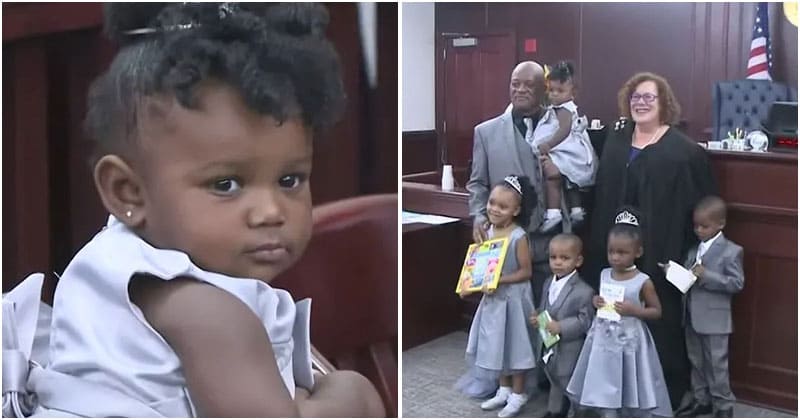 Every child deserves a warm safe home and a good education. It’s a sad reality that the world is still full of orphaned and abandoned children who are trying to survive day to day without being protected from abuse, hunger, violence, and sickness. However, we are happy to know that there are still many compassionate and caring people who are willing to open their hearts and homes to children in need of love and care. And the great man in the story below is one of them.

Meet Lamont Thomas, a foster dad who comes from Buffalo, New York. He has devoted the last 20 years of his life fostering children in need. Until now, Lamont has fostered more than 30 kids and officially adopted five of them. So with his two biological children, Anthony and LaMonica, he became a single father of seven children. Looking at what he has done, he deserves to be one of the most prolific foster fathers of all time.

Taking care of seven kids was enough for Lamont, so he decided to stop adopting. He wanted to spend all his time caring for his children and giving them a good life. However, when he came across a very special case, his mind changed. And his latest move may be his most beautiful yet. He decided to adopt five siblings, ages 5, 4, 3, 2, and 1, and proudly becomes a father of 12 kids. Being a foster parent is not an easy work, but he is willing to give it a go.

The five siblings Zendaya, Jamel, Nakia, Major, and Michaela were children of one of Lamont’s foster kids. They were placed in foster homes themselves and were separated when they found their new home. They were adopted by four different families in four different cities. That meant they wouldn’t be raised together. Lamont didn’t want to let them spend their childhood without being by each other’s side, so he decided to get recertified as a foster parent and adopted them.

Raising five kids under the age of six certainly takes a certain amount of stamina, but Lamont said he’s not worried about that at all. He said that these children bring new energy to him. They’re lovable kids, very affectionate. They deserve to be raised as siblings, and that is his mission.

Lamont never expected anything in return, he only hopes that other people who read his story will perhaps be inspired to foster, or even maybe adopt children in need. “I wanted to make a difference by being a difference, and I love what I do,” he shared.

Lamont is a true everyday hero, and we hope his new family will be full of love and joy. Do you have a heartwarming adoption story, please share it with us in the comments below! Be sure to share this touching post with your friends and family members to inspire them.

Dog Owner Bids Goodbye To ‘His Son’ In Heartbreaking Moment