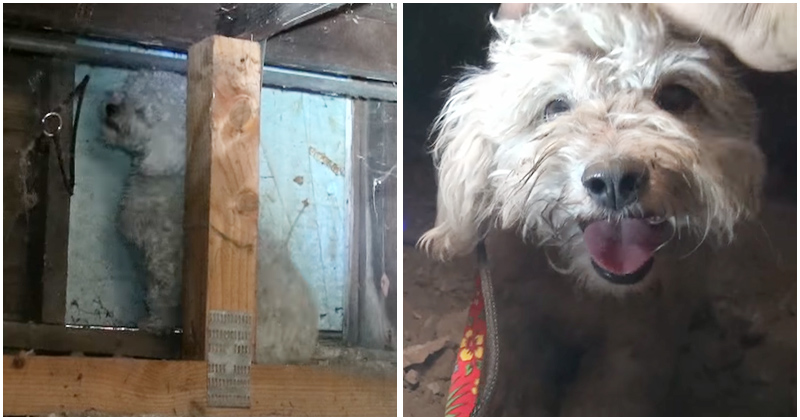 No one can deny the sad fact that countless dogs are being abandoned out there daily, but not many people are willing to help these pitiful souls out. They suddenly go from worry-free to homeless in the blink of an eye, not knowing what happened. Some can still be brave and cheerful, but some quickly lose their zest for life and could hardly live on after the unforeseen heartbreak.

Scotty was one of those poor guys. People founded him living under a house for five months straight, not wanting to get out. Even though they really tried to help, the terrified poodle just refused to let anyone approach him. It’s not until they contacted Hope For Paws’ founder Eldad Hagar that his situation was turned upside down.

Eldad and his coworker Lisa Chiarelli immediately showed up after hearing about Scotty. They crawled under the house, trying to corner him, but the little dog was just too scared to listen to these two strangers. He kept hiding away and even bit Eldad as they attempted to capture him.

However, these compassionate rescuers weren’t ready to give up on this boy. After two hours struggling in that narrow, dark, dirty place, they finally managed to calm the poodle down. Their mission was challenging for sure, but it was definitely worth it.

Scotty, after understanding that they were only trying to help, gradually let his guard down. Even though the little boy was still shaking a bit, it’s clear that he already began to relax when they put their leash around his neck.

The kind rescuers spent some more time petting Scotty to soothe his nerves, and his smile melted their hearts. The luckless doggo even walked his way out smoothly under their guide.

His rescuer Lisa was also the one who fostered this charming boy during his recovery. Scotty turned out to be a lively pooch who absolutely adored his humans! He got along really well with other dogs in her house too.

According to the latest update from Eldad, Scotty later found an amazing forever home real quick. The bubbly boy is busy having tons of fun with his playmate right now, isn’t it great?

Please share Scotty’s heartwarming story with your loved ones!

12 Dog Breeds That Are Not Good At Swimming