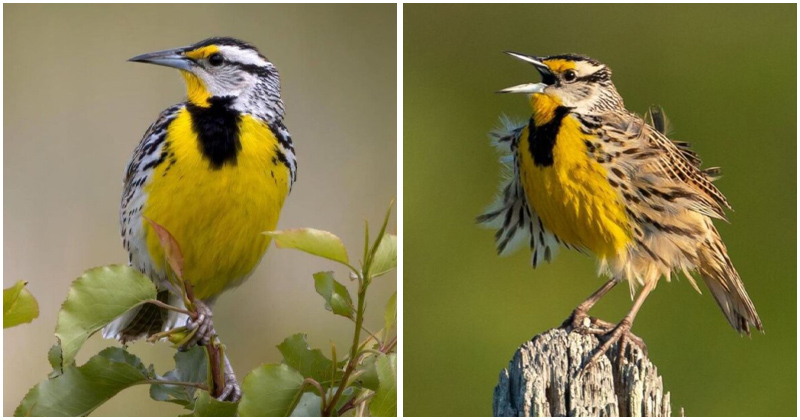 As the color of sunlight, gold and daffodils, yellow is one of the most eye-catching shades in this world that often gives us a satisfying feeling of warmth and optimism. It’s not surprising that when a creature is covered in yellow, it can always capture the spotlight wherever it appears.

Sure enough, the eastern meadowlark is one of those prominent beings. With a distinctive black “V” on the breast and yellow underparts, this charming cutie is definitely worth your attention.

First described by Carl Linnaeus in 1758, the eastern meadowlark shares a similar coat with the western meadowlark. Both of them have brown upperparts and white flanks with black streaks, radiant yellow bellies and a glossy black V under their throats. This medium-sized bird measures 7.5 to 11.0 in length and weighs about 2.7 to 5.3 oz.

The female eastern meadowlark is smaller and less dazzling than the male with a brown and black back and a duller belly, but it’s still a cute birdie anyway. Just like the male, the female also has a long, pointed bill. Their juveniles often resemble the mother.

This bird is a member of the family Icteridae (which is also known as the New World blackbirds). It can be seen from Eastern North America to South America, but most widespread in the open fields and pastures of the east.

You can listen to this gorgeous critter here:

The eastern meadowlark loves to live near the ground since it often searches for food there. It spends most of the time hunting arthropods, but it doesn’t mind having some seeds and berries once in a while either.

The female often builds a nest to lay eggs in the summer. The nest is often placed right on the ground and covered in grass. Each bird lays 2 – 6 eggs, which are also incubated by the female itself.

The eastern meadowlark’s population is gradually declining due to habitat loss.

Regent Honeyeater, A Striking Yellow-Flecked Bird That Is Critically Endangered

Rescued From Circus With Life-Risking Wounds, Lioness Made An Incredible Recovery And Freed In The African Bush

Meet The House Sparrow, The Most Widely Distributed Brown Bird On The Planet

20+ Photos Proving That Pets Can Sleep Pretty Much Anywhere