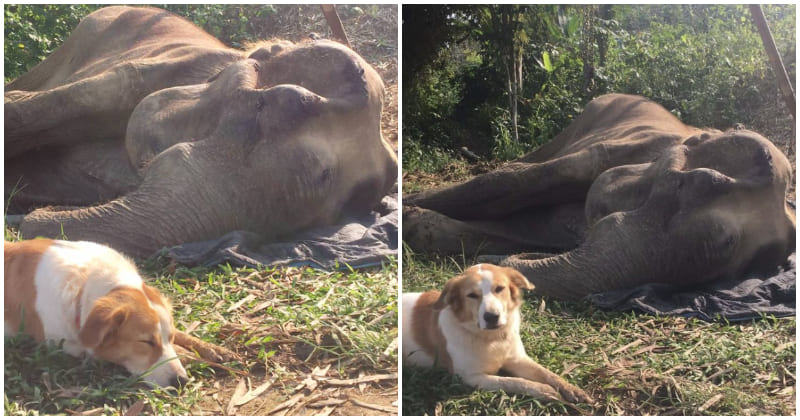 Katherine Connor, the founder of BLES – Boon Lott’s Elephant Sanctuary, created the sanctuary in the name of Boon Lott – the baby elephant (which means survivor in Thai). The sanctuary is the home for retired and rescued elephants. After years of mistreatment, at least they can live a life free of burdens at BLES.

Boon Thong was an elderly elephant who was also brought here. In the photo below, she was grieving her friend, shedding tears to see her friend off.

A few years later, having experienced delightful times in her life, Boon Thong took her final breath. This time, she didn’t have any friends of her species around, but she had people, who always loved and cared for her.

Besides, Boon Thong also received the love from one odd friend of her, who immediately rushed over her place when she started feeling not so right. That was Pancake, a dog. Pancake was once a homeless dog wandering amongst the streets in Thailand, but now she is an irreplaceable member of Boon Lott’s Elephant Sanctuary (BLES).

Despite that Pancake had nothing in common with Boon Thong, she somehow fitted in perfectly well with the life among the elephants at the sanctuary. Pancake and her elephant friend – Boon Thong developed a close-knit relationship with each other.

Boon Thong was in her 60s at that time and she was rescued 5 years earlier. Her life before the time at BLES was repetitive days of carrying passengers, for over 30 years. That was quite a long time and it exhausted her. On the day she came to BLES, she was in poor conditions with one blind eye, ripped ears, deformed back, misshapened head, etc.

However, the shadow was no more since the time she arrived at the sanctuary. In there, she was truly free to rediscover the long lost part of her life and be loved by the people.

Back to our story, Pancake, along with Katherine Connor, decided to stay with Boon Thong until her final moment. They sat silently together for hours, recalling every piece of memories, from the first day they came to meet each other.

For nine hours in a row, they didn’t leave Boon Thong for a single second, their genuine love and sympathy were more valuable than anything in this world. “Pancake, with that beautiful heart of hers, did not leave Katherine or Boon Thong once,” BLES wrote on Facebook. “She knew she was needed, to offer support and she quietly lay beside Boon Thong, until sunset — until the final breath.”

The sanctuary conducted a formal funeral for Boon Thong. They laid her down beside her other friends of her kind to reunite her with the ones she loved; they also surrounded her body with fruits and flowers and wished her all the best wishes.

At the sanctuary, Boon Thong was all on her own and she had fulfilled the very last years of her life there. She rampaged the forest, chose a favorite tree for scratching. She had her favorite spot to hang out on the daily walks. She also bathed at one same spot on the stream, coating herself under a layer of mud. These lines are from Katherine’s tribute for Boon Thong.

Elephants are incredible creatures. They are highly smart, have a good memory and also have emotions just like humans. Take hands to protect these beautiful creatures of the forest.

Find out how you can help the good people of the Boon Lott’s Elephant Sanctuary here.