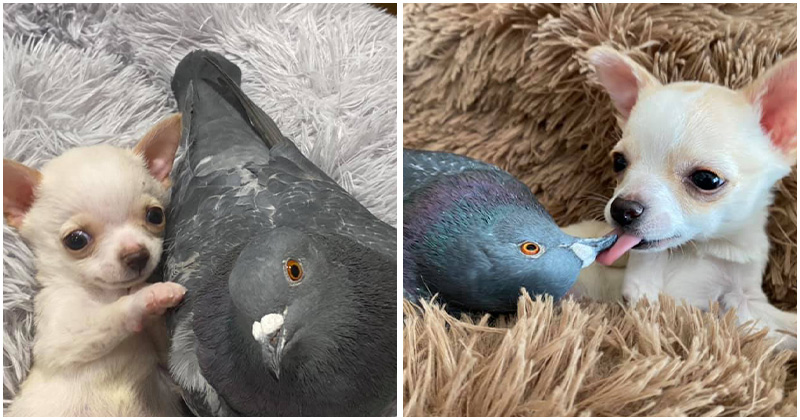 It’s no secret that different species of animals can create amazingly strong friendships, but these friendships are even more meaningful and inspiring if they come from the “abnormal” beings like the little pigeon and the baby chihuahua in this astonishing story. Meet Herman and Lundy, two incredible creatures that can melt the hearts of even the toughest ones in this world.

Herman is a bird like no other bird. He was spotted sitting in the same spot in a parking lot for a couple of days and was rescued by The Mia Foundation’s founder Sue Rogers.

No place was willing to take a flightless bird like Herman in, they all thought that putting him down would be the best solution, but Sue had other plans. She wanted to make sure Herman would be able to live a fantastic life with other rescued animals just like him in her shelter in Rochester, New York.

Even though the luckless pigeon could never regain his ability to fly, he is still a lively cheerful birdy who loved to watch over Sue’s newborn puppies in the shelter. He always wants to snuggle with them all the time and even tried to preen them sometimes, until these little puppies grow up and find their own forever home.

Lundy was an unlucky baby just like Herman. He was born with a rare condition called swimmers syndrome (or swimming-puppy syndrome), which made the poor pooch unable to use his hind legs. Maybe because they were in the same boat, Herman and Lundy’s bond bloomed beautifully right at their first meeting.

“Thursday night I took Herman out of his playpen to give him some time out and I put him in a dog bed. Then I had to tend to Lundy so I put Lundy in with him. They just looked really cute together so I took some pictures and posted them to Facebook and the next morning it was crazy,” Sue recalled.

Needless to say, they had become best friends. Their pawsome friendship rapidly when viral and donations were pouring in, and some new fans of the unlikely duo even asked to adopt Lundy. However, the baby dog just wasn’t ready to be adopted, and Sue didn’t want to separate these two either. They completed each other in a way that no one else could.

Update: Sadly, Lundy crossed the Rainbow Bridge only a few months afterward, but their awe-inspiring friendship will be remembered forever. Herman and Lundy’s story has been turned into a book and The Mia Foundation is planning to create a series of children’s books starting from this wonderful one.

Please share this touching story with your loved ones!

Woman Creates A Tiny Bed For Squirrels In Her Garden

20 Pets Who Love Their Owners At Any Cost

A Photographer Captured A Charcoal Of Sophie, A Bird That Looks Like A Fairy Tale